One of the oldest parts of Kolkata, Kidderpore has many legends associated with its name. Some attribute it to Khizr / Khidr being the guardian saint of the seas to the fishing communities of Bengal.

Another theory points out that the port probably got its name from Lord Kyde, a 19th-century engineer who designed and supervised the building of the lock gate that connects the nearby port to the Hoogly River.

Containers of all kinds and ships of various sizes can be seen in and around the docks area.This area is surrounded by many industries and factories including the Garden Reach Shipbuilders, which was founded in 1884 and is one of India’s leading shipyards.

The famed swing bridge and drawbridge here have withstood over a century of turning and opening to allow passage of big ships.

To honour the nearly 35000 Indian indentured workers who had migrated to Suriname, an aluminium statue of a plainly-dressed couple carrying a potli which symbolizes the first Indian man and woman to set foot on Suriname was set up as a memorial at one of the ghats.

In Tilbury we have a great industrial heritage with working docks, as does our partner Kidderpore. Arrivals and departures , immigration, emigration, the moving of goods and materials and Industry have been at the fore of our thinking when developing ideas for the stories and artwork for the Tilbury Scroll.

In 1909 Tilbury became part of the newly established Port of London Authority with extensive facilities for handling the importation of paper, cars, grain and bulk cargos. Talking with ex-dock worker, Les Morgan, children from the Gateway primary schools and locals learned about the changes in the docks over the years from physical man-handling goods with special hooks, sacks and trolleys along with tea chests from India to the now familiar huge containers that bare no sign of what is inside and very few workers needed by comparison.

We have celebrated the movement of peoples by the reference to The Windrush – on which, in 1948, the first immigrants arrived in Tilbury from Jamaica and the £10 poms heading for Australia left from here in the 1950/60s.

The defensively positioned Tilbury Fort provided a direct link with India in that it is almost identical to the Fort William in Kolkata.

The surrounding marshland supports many rare wild-life species and also supplies grazing for several horses. Walkers will have the opportunity to experience the Gravesend/Tilbury Ferry which links Tilbury with Kent and is the first passenger crossing upstream from the Thames Estuary.

The Tilbury Riverside Project are involved in the Silk River project as it has connections that are important to the people of Tilbury. With the Port of Tilbury and the Bata factory there are many of the community that would be interested in the Silk River and the ‘twinning’ of the towns. 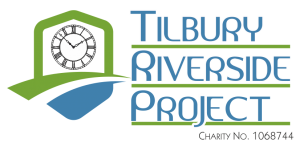 We hope that the project will educate people both here in the UK and India about each other and their cultures. By working together and learning about different ways of life will bring some tolerance and understanding.