A living bridge between two countries 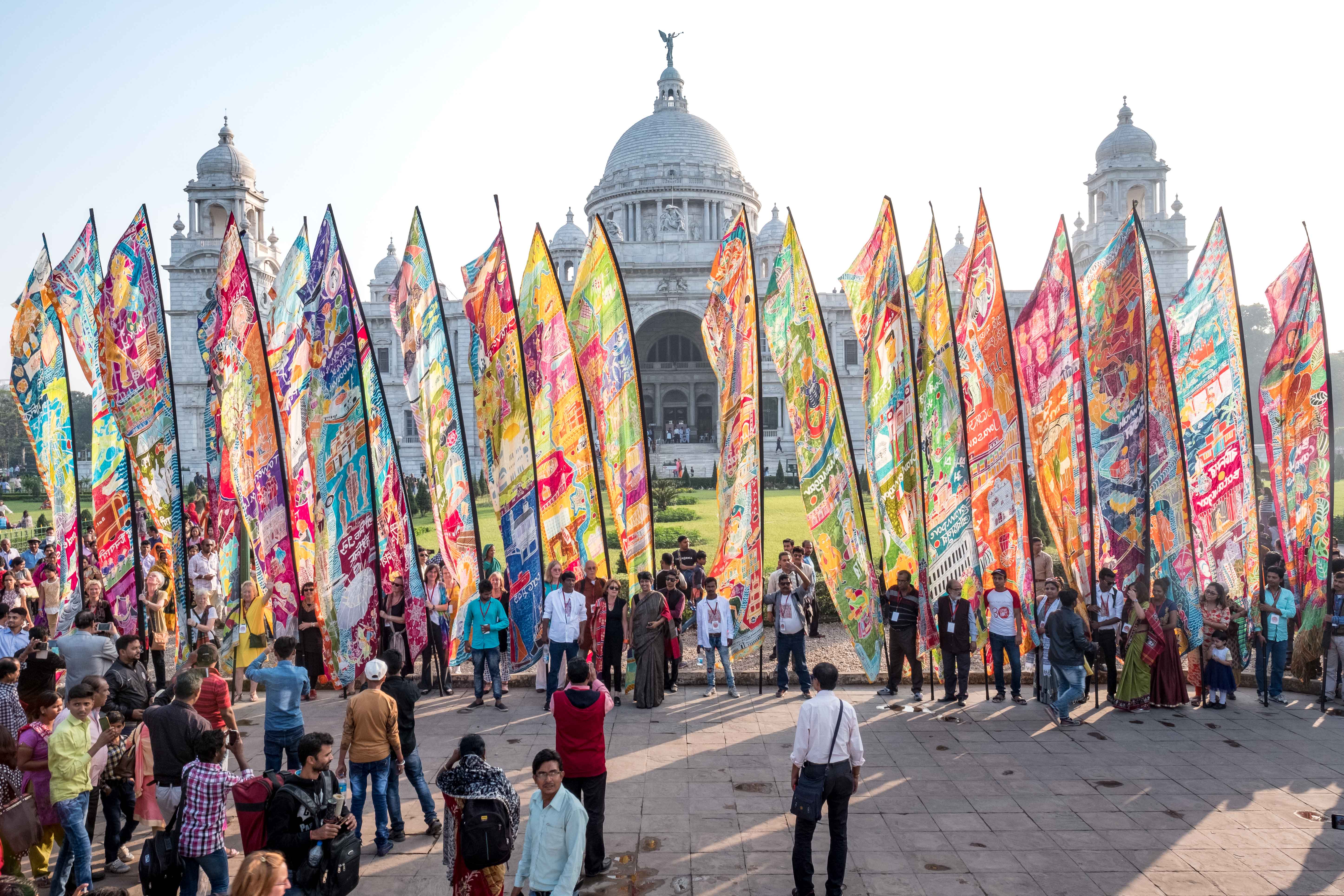 A living bridge between two countries

On December 20, 2017, Posted by admin , With Comments Off on A living bridge between two countries

“A living bridge between two countries” – artists from West Bengal and Thames have taken part “in one of the most important projects of the Year of UK/India Culture.”

Silk River has been in the making for over two years, involving 20 communities along the banks of the rivers Thames and the Hooghly, engaging thousands of participants and teams of artists in both the UK and India. On Saturday 16 December 2017 the ‘Journey of Surprises’ ended with a spectacular finale at Victoria Memorial Hall in Kolkata, India.

Representatives from the 10 river Thames communities that took part joined members from the 10 river Hooghly communities to parade the large hand-painted silk flags to the Victoria Memorial for a closing ceremony to mark this incredible collaboration through the Silk River programme of cultural exchange. They were accompanied by a multitude of different dancers and musicians, even some bagpipes!

In attendance at the closing ceremony was British High Commissioner to India Sir Dominic Asquith, who said:

“It’s been inspiring what we’ve been seeing, not just the colours but the enthusiasm, the amount of determination and commitment over the years to make this a reality…It’s what I call the living bridge – it is bringing communities together in the UK and in India in a way that is really relevant to the communities that they exist in.”

British Council India Director Alan Gemmell OBE was specially in Kolkata for the Closing Ceremony and thanked everyone involved:

“I’m at the final event for one of the most important projects that we’ve had in the Year of Culture.  Silk River has connected 20 communities in Kolkata and London and been at the heart of our mission to use the Year of Culture to celebrate the modern day relationship between our two countries, to connect with people and to inspire them to build a relationship for the next 70 years.  It’s been a wonderful event, it’s been an incredible project and we’re so, so grateful to everyone involved.  Thank you very much.”

British High Commissioner to India Sir Dominic Asquith
British Council India Director Alan Gemmell OBE
British Deputy High Commissioner Kolkata, Bruce Bucknell
The British Deputy High Commissioner Kolkata, Bruce Bucknell, has been hugely supportive of the project, and in his words Silk River is important because:
“It brings together the silk, design, colour, people to make the silk, to come up with the designs, to work together, and it also brings together what actually happens in the communities that these banners represent…It’s been thrilling to have all these people over from Britain and to actually stir up and bring you this idea of making places and bringing intangibles, what makes communities, what makes a place.”

The Kinetika team from the UK was led by artistic director Ali Pretty who travelled with Jo Beal and Jane Ford who have co-ordinated the project in the UK, along with Mike Johnston senior lecturer in Creative Media at Bath Spa University, who documented the entire project through photographs and interviews with key participants.  The journey was also documented by Kevin Rushby, Travel Journalist form The Guardian who covered the walks with a daily blog.

There is now an exhibition of the 20 scrolls at the Victoria Memorial Hall, Kolkata, from 19-31 December 2017 after which they will return to the UK.

Open now from the 19th to 31st December, all 20 of the Silk River scrolls will be on display in the spectacular Central Hall at the Victoria Memorial in Kolkata.

Here you will be able to see the intricate designs made by artists from the Thames and Hooghly locations, which have been painted on the finest hand woven silk made in West Bengal especially for the project.

Each of the scrolls is 6m x 1.2m and they have all been carried on foot, or on different kinds of river and road transport, from Kew Gardens to Southend in the UK (138 miles) and from Azimganj to Victoria Memorial in India.

More information about them can be found below.

Time: 10 am to 5 pm except Mondays and designated holidays.

Photos of the exhibition at Victoria Memorial Hall by Mike Johnston.