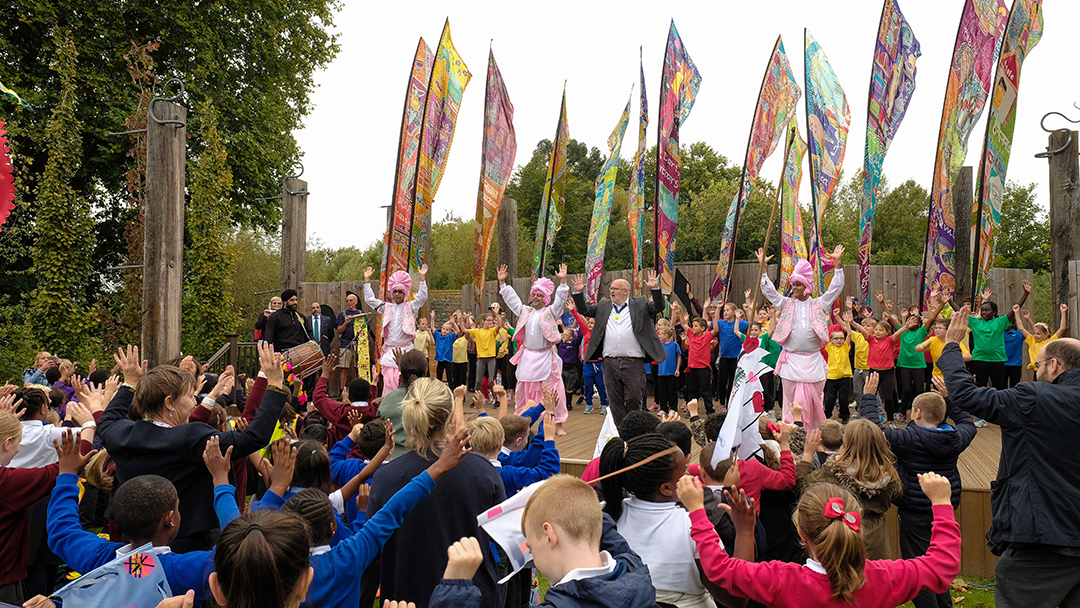 On September 27, 2017, Posted by admin , With Comments Off on Silk River finale comes to Dartford!

We assembled at 09.30 at the Bridge Community School, with the Dartford banner flowing beautifully in the morning breeze. Old, young, and those in between then set off on the long walk up the old tramway which leads to the Long Reach river bank. There we greeted the arrival of the travelling banners from the other towns along the Thames, and added our banner to their number. Setting off back along the tramway, we led the visiting travellers into our town. As we approached, the sounds of song travelled on the wind; we soon came upon a wandering minstrel in the form of a guitar-playing musician, serenading us with songs by Dartford’s famous Rolling Stones. Reaching the entrance to the Bridge Development, we were met by Dartford Bridge Community Primary School, who performed a fabulous rendition of Ruby Tuesday (appropriately near to the entrance to Ruby Tuesday Drive!).

Next stop was the What If Gallery, where Ruth Howard and the What If crew had put on a wonderful Indian exhibition, with images showing the process of making the banners as well as showcasing traditional Indian artefacts. We headed back to the war memorial outside Dartford Library, where a large group of local residents had gathered to witness the ceremonial raising of the flags. Before the flag raising began, we were treated by the Council to a delicious spread in the ever-wonderful Peter Blake Gallery within the library. Homemade samosas and spring rolls filled our hungry tummies after a long, if enjoyable, walk down from the riverside.

Crowds of children from local schools had gathered outside for the flag raising, proudly carrying their own excellent flags they had made as part of the project. Our final stop was the outdoor theatre (via a little intro to the lakes for those not from the area) where children and teachers were gathered and received certificates from Jeremy Kite, from Dartford Borough Council for their work. The explosive finale then featured a magnificent bhangra performance which it was impossible not to join in with!

All in all it was a great day out – celebrating and exploring Dartford, meeting new people, showing off those beautiful banners and recognising the unbelievable amount of work which has gone into making this a success. Thanks go particularly to Kinetika for giving us the opportunity to be involved in such an inspiring project, the What If Gallery, Ruth Howard and Tanya Outen for all their hard work on Dartford’s banner and event, to Dartford Borough Council, and to everyone else who participated in some way. What a wonderful experience, which we hope is not over yet. Watch this space for more Silk River related events coming up which we may feature in 😉

Dartford Arts Network (DAN) is an inclusive arts and cultural organisation for those in, around and connected to the borough. We aim to stimulate and engage the local arts community alongside celebrating the rich heritage and cultural values of the town through a contemporary dialogue, that foregrounds innovative and well considered ideas.