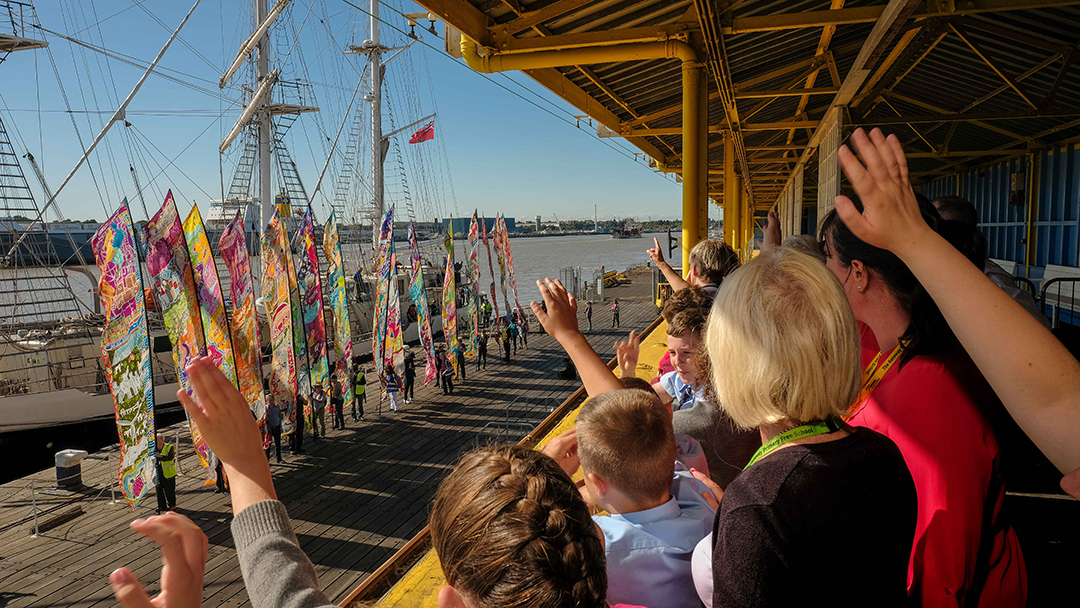 On September 26, 2017, Posted by admin , With Comments Off on Tilbury and East Tilbury were visited by the Silk River ‘art walk’ last week

After carrying the twenty-two Silk River banners 128 miles (206km) on foot and 10 miles (16km) by river, triumphant participants from ten areas along the Thames arrived in Southend on Sunday 24th Sept. Since beginning the journey in Kew Gardens 10 days previously, participants travelled through Tower Hamlets, Greenwich & Woolwich, Barking & Dagenham, Purfleet, Dartford, Gravesend as well as Tilbury and East Tilbury before reaching a welcoming crowd for the finale on Southend Pier.

It’s been an eventful journey, with walkers being treated to all manner of varied entertainment along the way, all designed to highlight each area’s local identity as well as their connections with India in this year marking 70 years of Indian Independence.

Each place was full of surprises, like the pupils of Lansdowne School, Gateway Primary Free School, Herringham Primary and Tilbury Pioneer Academy performing songs and stories to the walkers at Civic Square. Local historian Mike Ostler spoke about the Peace Memorial, and ex docker Les Morgan entertained everyone with stories of life on the docks.

The area’s connections to India are clear, with road names such as Calcutta Road and walkers noted that all the intersecting roads are named after parts of the British Empire with which Tilbury was connected by trade.
The walk made a stop at the Cruise Terminal to bring this point home, where they were shown the history of the port and the surrounding area.

Participants were later invited on a tour of Tilbury Fort, which has an identical twin in Calcutta named Fort William, and then carried their giant silk banners along the estuary path to Coalhouse Fort for another photo opportunity.

On the penultimate day in East Tilbury, connections with the Indian town of Batanagar were revealed through the Bata factory connection, with the able assistance of Mike Tarbard from the Bata Heritage Centre. An injection of slapstick comedy was added to the proceedings with a performance by the locally based Complete Commedia Company.

Bernadette Wakeling, of the Complete Commedia Company said:
“The Complete Commedia Company were delighted to join Bata Heritage Centre and Kinetika to raise the profile of Thurrock’s rich and varied heritage as part of Silk River. A guided walk and talk about the true Bata story was led by the Heritage Centre. It was followed by Complete Commedia’s version which was slapstick in nature and full of buffoonery, “The Cobbler’s Tale” referenced Thurrock’s key strategic place in World History and we look forward to working with our partners in the future.”

And so, it came to be the last day in Southend, which was not just the end of a 10 day walk but the culmination of over a year’s planning, plotting, coordinating and making. A year in which artists from each of the areas learnt how to hand paint their designs on the delicate Indian silk. A year of research and planning by the Silk River team and the many local partners to design the routes and tell their story. Tales which were inspired by the Indian story-telling tradition of Patachitra – which are pictorial in nature, painted onto large scrolls, and sung.

So, in fitting style, Silk River was given a rousing finale on Southend Pier by the Mudlarks Choir and, after a speech by the local Mayor and a ceremony by the Hindu Association of Southend, the banners were waved off on the paddle steamer Waverley, the last sea-going paddle steamer in the world.

Speaking to all the Silk River partners that have made this project possible, Ali Pretty (Artistic Director) said:
“We created beautiful artworks that reflected our communities and connected us to each other. You gave us at Kinetika, our fellow walkers and our audiences a fabulous day in each place. From small seeds sown at Kew Gardens we walked for 10 days and 128 miles later we emerged at the end of the longest pier in the world in Southend carrying 22 x 6m silk scrolls where we were sent off with blessings and a song to board The Waverley sailing all the way back up the Estuary alighting at Tower Bridge – amazing!

Thanks to each and every one of you for your invaluable contribution to what has become an extraordinary project. I am very happy that we have nurtured a Silk River network along the Thames, one which celebrates and embraces the diversity of our population and in particular in 2017 our UK cultural connection with India.

We still have a fair few more miles to go – Diwali in Trafalgar Square, the exhibition at Kew Gardens and of course the 12-day journey along the banks of the Hooghly – that will continue to strengthen this foundation and extend to our partners in West Bengal.

If we can do this, then we can do more! It’s feels very empowering and I’d like to think that we can be proud to demonstrate that artists and arts projects such as Silk River really do have a role to play in shaping our futures. Thank you for that, it’s an incredible gift.”

The walk might be over, but the beautiful banners will be appearing again at the following UK events:
Sunday 15th Oct Diwali Celebration – Trafalgar Square
Sunday 22nd Oct to Friday 27th Oct – Exhibition at Botanic Gardens Kew

This is followed by the culmination of the whole project, a culture and heritage inspired walk along the Hooghly River in West Bengal 6-17th December. More info about this, and the whole project can be found on the project website: www.silkriver.co.uk