Most of the roads around the older city are either parallel to the river of at ninety degrees to it. No confusion can possibly exist, can it? So why do I keep getting mixed up? Heading north when I mean south, walking for ages before I realise I am going 180 degrees in the wrong direction. And even more peculiar is that no matter what direction I go, I always seem to hit the river and that really is where things get mixed up. 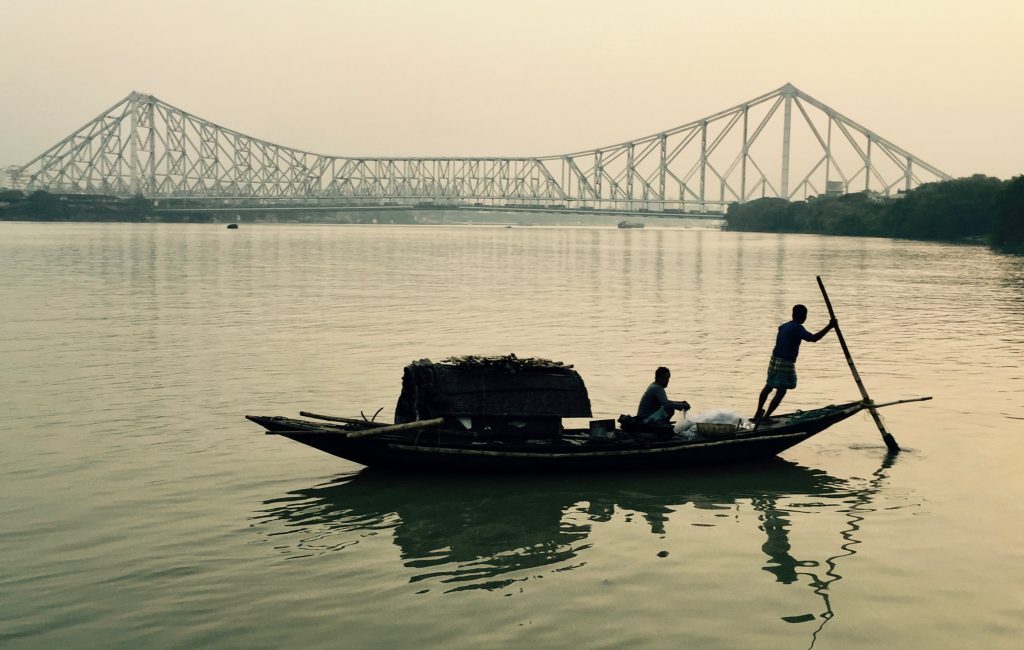 This morning there is a man with a dog on a chain, both washing themselves. He tells me that the dog is more intelligent than many humans. I smile indulgently. I own a dog myself and I understand how easily a dog-lover can slip into exaggerated claims for his flea-bitten mongrel. My dog Wilf is a rescued animal, but if anyone asks, I say he is a “Bonsai Hound”, specifically bred to dig for moles. No one has ever questioned this preposterous nonsense. And in a similar manner I don’t argue with the man on the ghat. But then he goes further. “I’ve taught this dog to read and write.”

“How does he hold the pen?”

“Newspapers and stories, but only in Malayalam.”

I’d love to say that I then said. “Oh I can manage a bit of Malayalam myself. Let me write a message for him to read.” But instead I conclude that the man is right: some dogs are more intelligent than their owners.

Later I begin to wonder if I might have been hasty in judgement. I notice a street dog staring intently at an advert for hair oil. Another one appears to be wearing a pale blue shirt and sitting on a high stone plinth. Below him a trader is counting money and the dog’s head moves, like he or she is counting too. The trader finishes and looks up. The dog raises an ear. Is that a secret signal?

We are at the end of our long double-sided journey: first down the Thames – the western leg – and then down the Hooghly, the eastern. They should have been totally and utterly different, but I’m beginning to feel that Silk River and Calcutta are together performing some kind of weird alchemy where East and West don’t mean much any longer. This feeling only grows when we head out for a midnight walk with Anthony Khatchatourian, an Indian of Armenian origins who has realised that walking tours of Calcutta are a lot more pleasurable when it is cool, traffic-free and without people – hence the late start.

The complete nocturnal transformation of the city is astonishing. We stroll up the middle of Council House Street past the West Bengal Governor’s residence which Anthony says was modelled on Kedlestone Hall in Derbyshire, then St John’s Church which looks a lot like St Martin’s-in-the-Fields in London, and also the High Court which is really The Cloth Hall from Ypres in Belgium, except that it isn’t: the Cloth Hall was rebuilt after WWII and is a copy of the High Court in Calcutta, the same court where Nehru and Gandhi were both sentenced to an imprisonment which never happened. I’m starting to spin a bit: it is almost one in the morning, but Anthony shows no sign of flagging.

All around us the city sleeps. People lie on the pavements, in corners, under plastic sheets and inside home-made mosquito nets. The soft shadows of peepul trees rest against the walls. A bare-chested man sits on top of a doorway in a little space he has carved out as a home. No one stirs as we pass. No one snores or makes a sound. The city is totally silent and tranquil. Except it is not, because now, you see, there is a new set of bosses running this town. The dogs.

You can see it in their body language: during the day they behave like pets. They wag their tails. Some even hold a muzzle out for an impromptu stroke. Mostly they sleep and keep a low profile, ignored by passers-by. But not now. They are alert, standing at street ends, ears and tails up, staring. They run purposefully in loose packs down the centre of the streets, and they bark and snarl. They no longer appear to see us humans – we have become invisible to them, just as they were to us in daylight.

Anthony’s history also seems to want to overturn things: make the opposite true. The Black Hole may never have existed, The British practised forcible conversion to Christianity, and Gandhi survived for a long time due to a secret armed guard provided by the British, his deadly enemies. It’s challenging stuff. I want to have a good discussion, but its late and time for bed. We all thank our guide and he directs us back to the hotel.

I’m walking quickly, thinking about the tour. I want to check some facts and read books. I don’t think Anthony has got everything right, but he has stimulated thought. The entire journey has been doing that too: melting boundaries and questioning preconceptions.

After a while we realise we are going 180 degrees in the wrong direction.

Images of the night walk will appear here when available.