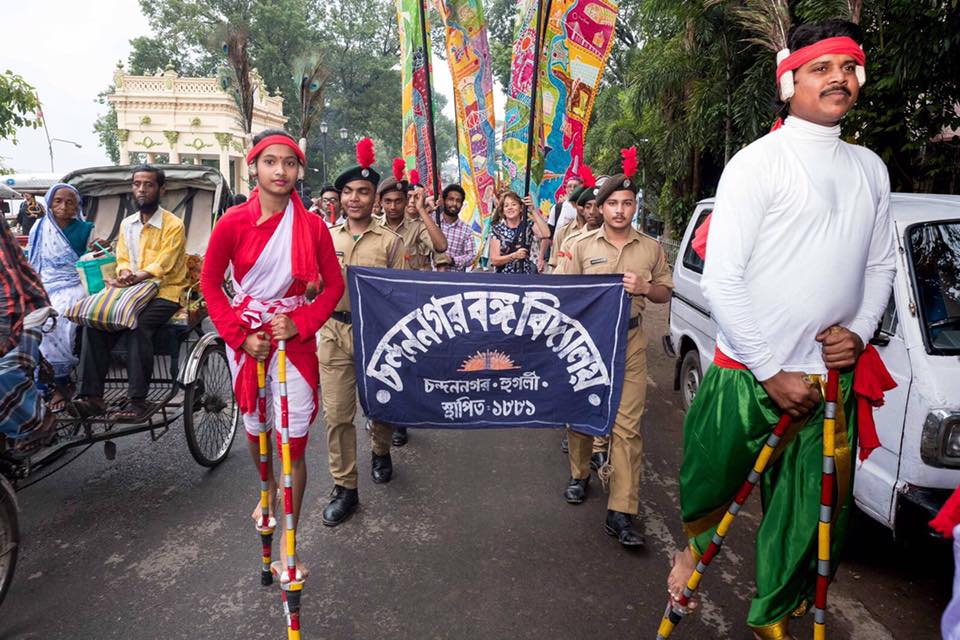 The stilt-walking, someone in the crowd tells me, is an ancient local art developed for moving fast in the days when dacoits haunted the surrounding jungle. Another bystander, however, is quite sure that the stilt-walking was introduced in the late 19th century as part of a programme to encourage young people to be fit and strong.

Someone else craftily points out that in the Bengali language the phrase, ‘I don’t know’, only exists in theory. You never hear anyone say it. 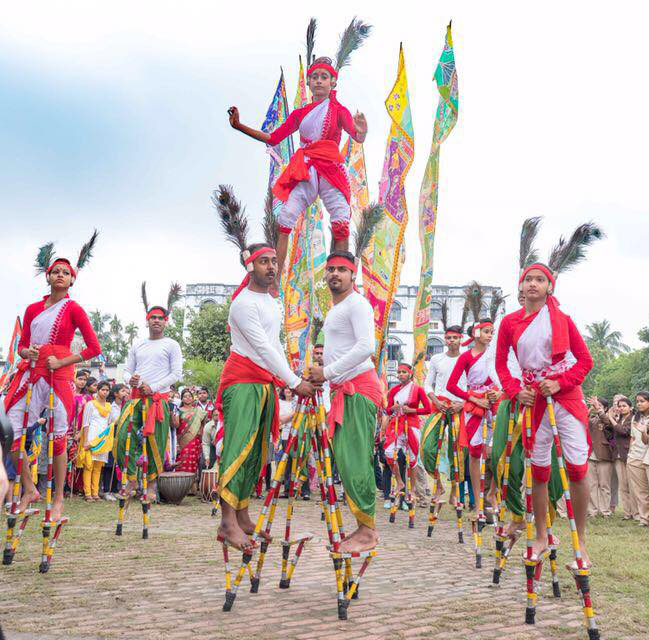 For a language that is very precise in most respects, this is an astonishing gap in vocabulary. For example, Bengali has at least ten words for uncle and aunt. I have it explained to me in clear and simple terms. Your father’s older brother is jethu; his younger brother is kaku; your mother’s brother’s wife is mamima, your father’s sister’s husband’s sister is pishi. If you like her a lot, she is mishti pishi: literally ‘sweet aunt’. However, should you like your mother’s brother’s wife a lot, you would never call her mishti mamima. That would be ridiculous. And so on. The explanation is clear, logical and exhaustive. By the end of it I understand nothing except that, in the Bengali family, relationships are very important, and that precise terms must be used.

“It’s like when you buy mangoes,” my informant tells me. “If you went to market and asked for mangoes, the sellers would laugh. They would think you’re an idiot and overcharge you. We have around 40 types. What you must do is ask, ‘Are the Alphonso in season yet?’ Or the Himsagars, or Dasehri, and so on. That demand for precision, of course, makes saying ‘I don’t know’ a lot harder.

The Silk River parade reaches the end of the Strand and turns left away from the river. In the centre of the junction, oblivious to the rickshaws, cycles, cars, pedestrians and trucks, a puppy is sleeping. He’s like a miniature canine roundabout. A noisy toto-driver honks his horn hard in his ear. The puppy lifts his head sleepily, takes a look around and settles down again for a bit more snooze. The chaotic traffic continues to circulate around him. It has been said that a country can be judged by its treatment of animals. If so, India is a difficult place to assess. Ruchira, our local coordinator for Silk River, tells me she once took in a street dog. Some people liked the dog, who was very good-natured, but others refused to let their children visit the house. That kind of person will spend a lot of money on a pedigree animal while sneering at the lovable puppies who form roundabouts in the street. But what can you say about a country – maybe the only country on earth – where a puppy who chooses to sleep on the busiest crossroads in town is left untouched?

I walk ahead of the parade and take up position at a chai stall. There is a delay in getting chai because the owner has had to run after a man who forgot to take his change. Meanwhile another waiting customer offers me some chocolate. When the chai man returns, my tea appears, apparently bought for me by a nameless passer-by. Three little moments of good manners and hospitality in quick succession.

The group watch the parade. “It’s procession done by the Red Cross,” one man says confidently.

“Actually,” someone else states with an air of absolute authority, “It is Children’s Day ceremony. They are doing it for that.”

But another man knows better. “It is an educational display,” he says. “They have brought these Britishers to carry bamboo poles on their shoulders like ordinary workmen in order to show us that physical work is honourable.” He thanks me for this and, despite my protests, buys me another chai.

As I leave, someone mutters, “It’s actually all about Mother Teresa.”

When the procession is over, we re-board our boat and set off downriver to Barrackpore. The river is much wider now. Kolkata is not far away. Barrackpore is where the Great Rebellion of 1857 started when an Indian sepoy by the name of Mangal Pandey killed a British officer and was hanged for murder. 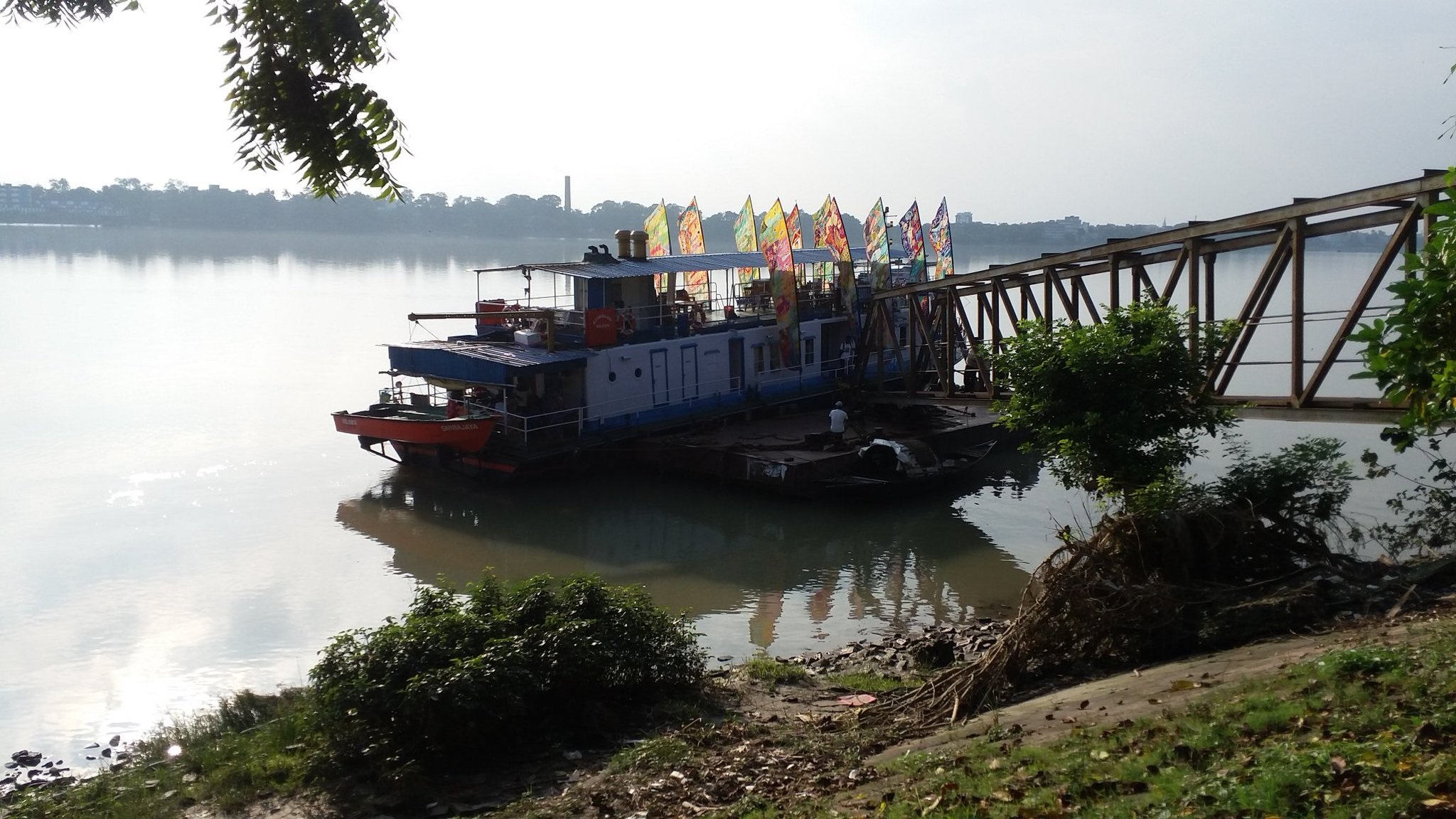 As soon as we arrive I head off with Shaunak, one of our local team, to cross the river by ferry and explore Serampore on the other side. For almost a hundred years from the mid-eighteenth century this was part of Denmark’s colonial empire, an empire that included just one other place, a tiny Caribbean island. The only remnant of that period appears to be St Olaf’s Church, but we are not hunting colonial relics, we want to find evidence of the local textile trade. Eventually, down a residential lane, we meet Uttam Halder who runs a textile factory from his house. On the first floor are long tables under which are piles of wooden blocks prints, each ornate with floral designs. Uttam’s workers use these to build beautiful patterns on bolts of bleached silk, each 6.5 metres long. He kindly gives me two old broken blocks as a souvenir.

Back on the ferry, it is now twilight. The river is a perfect mirror of dark blue light. As we leave the dock a river dolphin surfaces twice. In Bengali they are called susuk, pronounced ‘shushuk’. The Oxford English Dictionary, however, records that Gangetic river dolphins are properly called ‘susu’. So who is right? Well, I should point out that in English, in theory, the phrase ‘I don’t know’ does exist, but is rarely used. Probably the best strategy is to adopt the blissful attitude of the puppy on the roundabout and just let those noisy human arguments pass you by.

Photos from Day 6 – Scroll down for more photos. 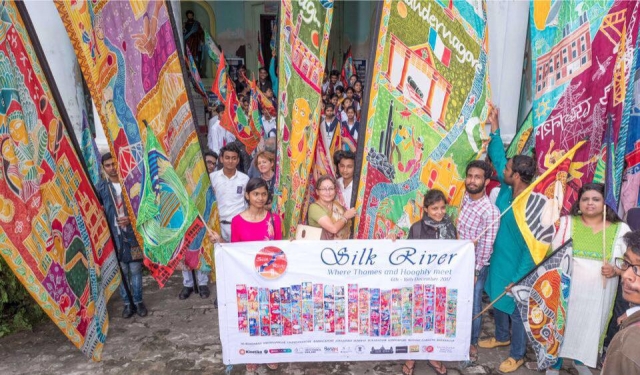 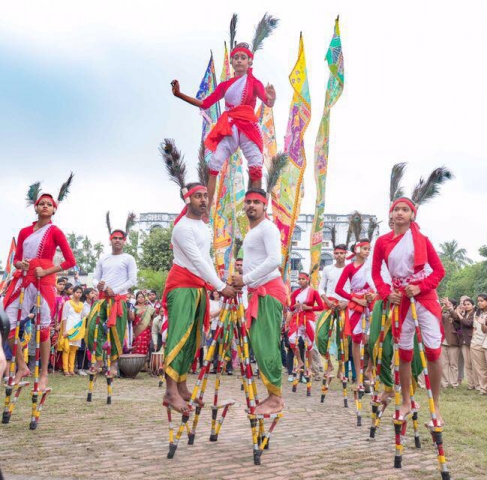 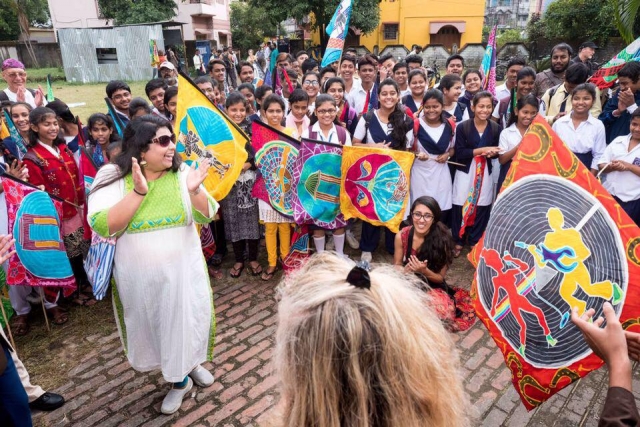 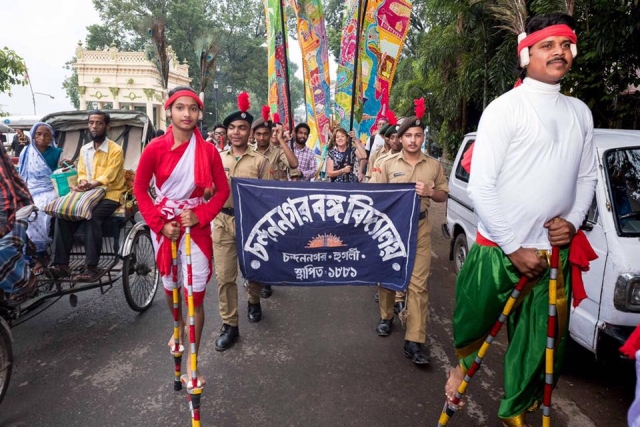 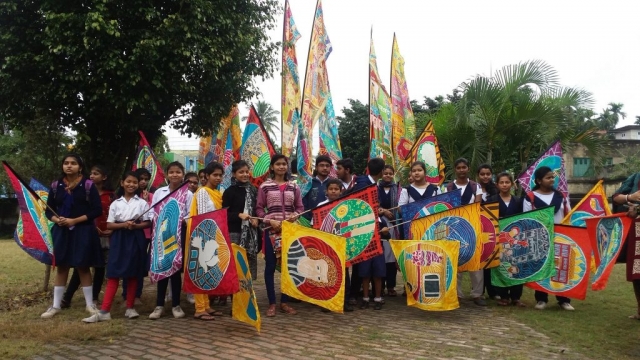 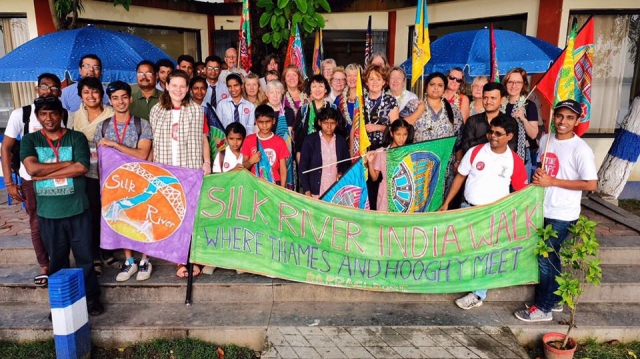 Explore the Chandernagore Scroll through the art, images and reflections of the people that made it possible 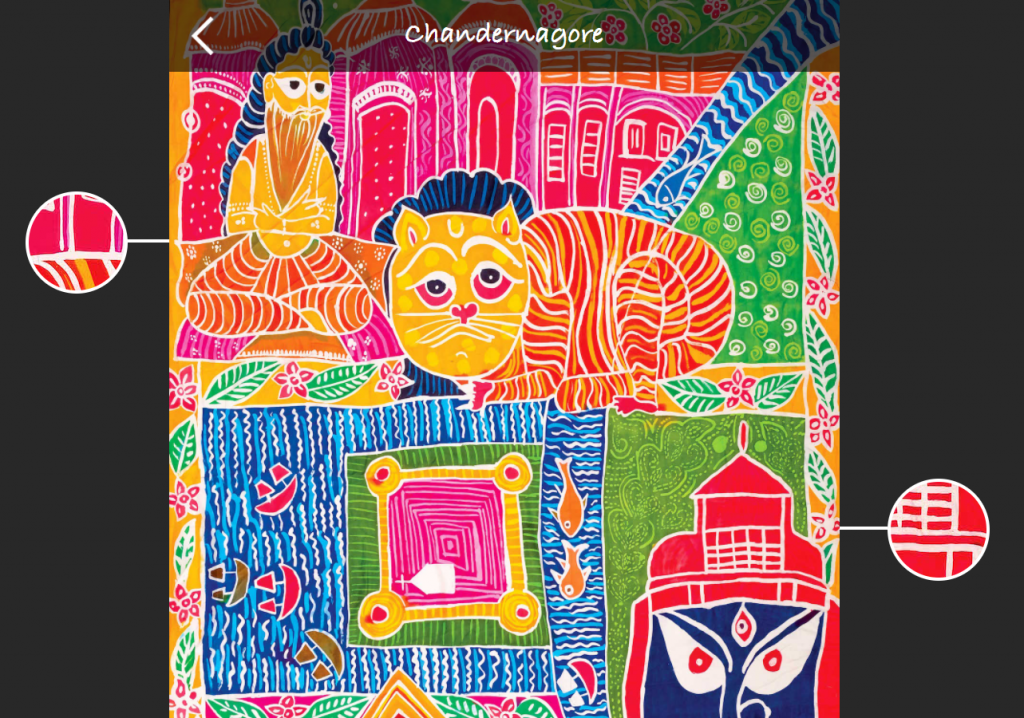 Photos below are from Day 6 – 11th Dec, Chandannagar to Barrackpore, all by Mike Johnston.