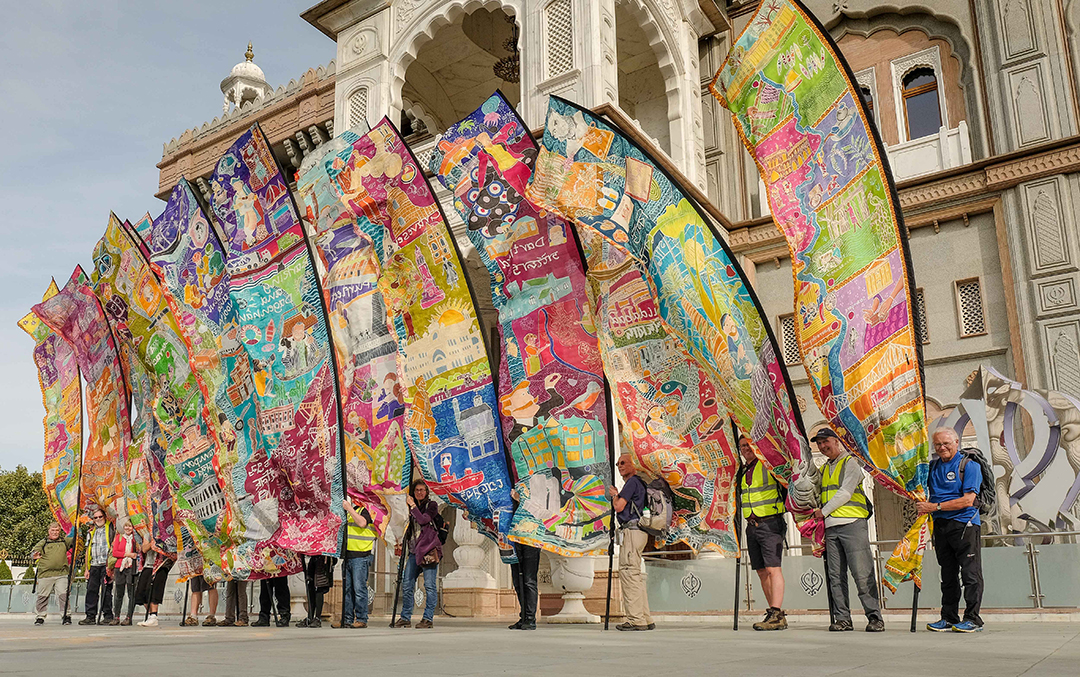 On September 21, 2017, Posted by admin , With Comments Off on Day Seven: We all need a bit of salvation – even the tomatoes

North Fleet, as locals are keen to remind us, is not Gravesend. It is, however, home to Ebbsfleet United Football Club where we all meet for today’s walk under a sign that reads, “No Ball Games.”

The mayor gives a speech and afterwards I ask him: can a town suffer from low self-esteem? He thinks it can. Gravesend and North Fleet are no strangers to urban decay, social deprivation and failure. However, he assures me that the area is on the way up.

For example, Ebbsfleeet United have a new owner and have been promoted, also the Thames Clipper boat service is going to start picking up passengers at Gravesend. 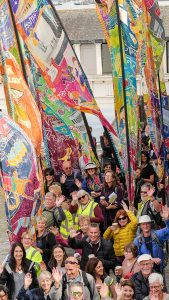 It has always struck me as ironic when places count progress as the ability to get away from them faster, but Gravesend is a town that has survived on communications. It was the last landfall for many emigrants en route to Australia or the Americas, the first place many touched hard ground again after long voyages. Pocohontas died here, waiting to set sail for her homeland. Even today it is a place of restless movement: the huge container ships that sail past may not stop, but they still take their river pilot and tug boats at Gravesend.

We walk up to St Botolph’s Church in North Fleet where the schoolchildren have been taught that there is a ‘t’ in water in order to sing James Bay’s Hold Back the River which they do in style. At the side is a small garden, the Secret Garden, where troubled people find salvation in growing fruit, flowers and vegetables on what was abandoned ground. They are clearly doing something right because the tomatoes are huge. Down towards Gravesend other parcels of land are still waiting for redemption. The former pleasure gardens are a gravel waste covered in weeds. According to legend, the last bear who fought here was killed, shaved and eaten by the local yobboes. The hotel where the Prince of Wales used to court Lillie Langtry is gone. Even the imposing cable works is abandoned and the tiled palace of the Terrace Tavern is a corner shop. The West Street pier is a wreck. At the end of every street, it seems, lies the river and there is no holding it back: the tide is awe-inspiring when in full flood, a constant reminder that change will come, it always does.

At the end of the day, the banners flutter outside the Sikh gurdwara. There is a large community here and they have built what is probably the largest Sikh temple in Europe. We get a tour and at the head of the stairs our group stops – there must be almost a hundred people. The guide, a young woman, asks if we have ever been inside a Sikh temple before. Many heads shake. Inside one of the side rooms, I look out the window past the decorative domes and pillars to the river. We could be in India. I spot a man carrying a drum. Will you be playing? Yes, he tells me, and two colleagues join him. An elderly man waves an ornate fly whisk and they begin. Then for a delicious half hour I drift along on a wave of their sacred music. Once upon a time, a Sikh family saved me from being murdered – it’s too long a story to tell – but since then I have always appreciated the gently benevolent welcome inside their temples. Tomorrow we enter a new world with which this part of Kent has traditionally had little contact: Essex.

Explore the Gravesend scroll through the art, images and reflections of the people that made it possible 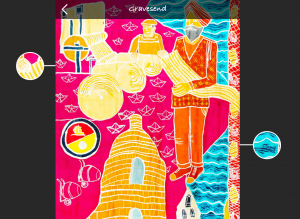