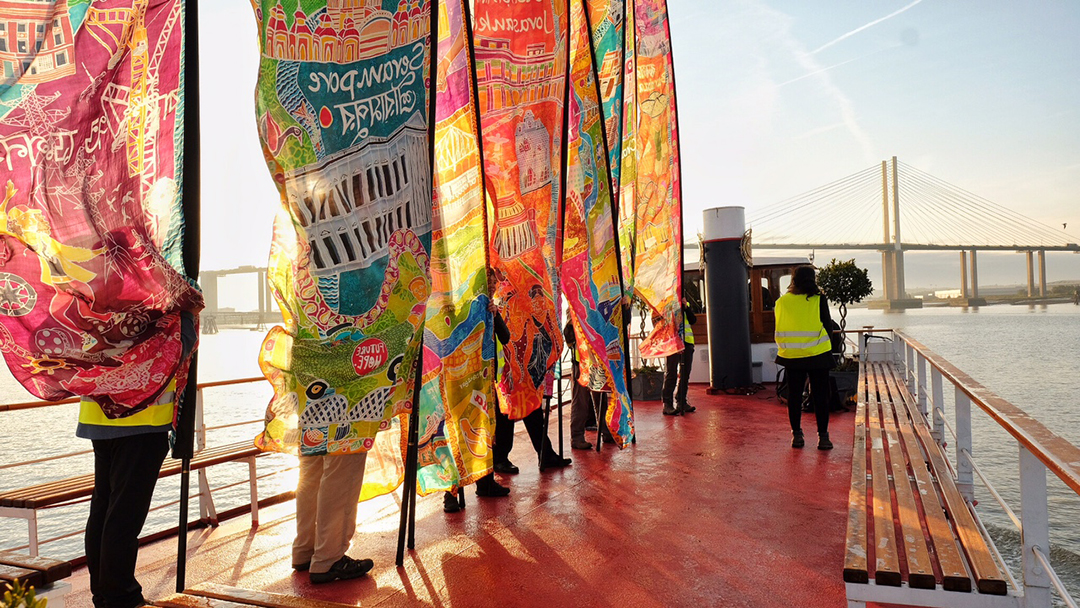 On September 20, 2017, Posted by admin , With Comments Off on Day Six: From Small Beginnings…

Dawn is just breaking when we emerge from the Kinetika studios and walk briskly down to the port in Purfleet. We are about to be treated to something special, but we don’t know that yet. At the C.Ro port gate we are met by men in hi-vis vests who walk us down past ranks of cars and vans waiting to be loaded on ships. “We’ve got two coming in soon,” says Barry, port manager.

He is the son of a docker who worked in the Royal Docks in the days when a stevedore carried a hook for unloading tea chests from India and the captain would treat the men to a tot of whisky up on the bridge. There were a lot of accidents. “They used to fall down hatches.” The problems are different now. Illegal immigrants are found inside the cars, given away by the steamed-up windows. 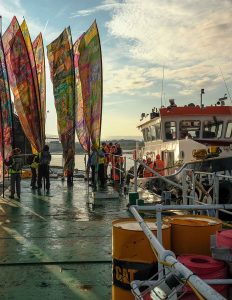 At the waterfront, surrounded by massive pontoons and machinery, there is a small boat, The Edwardian, and we embark. The muddy water seethes and sucks around the bows as the tide flows. We motor out to midstream and sail under the soaring structure of the Queen Elizabeth bridge. The sky is a great vault of blue. All too soon we nose up to a clutch of tugboats on the far shore and disembark for a walk into Dartford where we are greeted by schoolchildren singing a Rolling Stones song. The town is very proud of its two sons, Mick Jagger and Keith Richards who met on platform two of Dartford railway station. There is a blue plaque now to mark the spot where musical history was made when a teenage Mick was spotted carrying a Chuck Berry album under his arm by a young guitarist. I cut away from the banners and the group to go and pay my respects. “They did meet on platform 2,” says a railway worker at the gate, “But the station was rebuilt and no one remembers that platform 2 is now platform 3.”

It was a small beginning. Two lads from unremarkable backgrounds in an unremarkable town whose shared love of a neglected art form called The Blues drove them to do remarkable things. 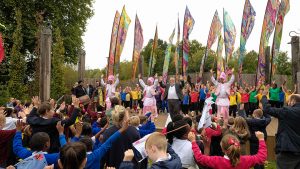 I am reminded of that later as we watch a hundred schoolchildren parade at the town’s open-air theatre in the gardens behind the public library. All the local dignitaries have turned out. There’s the lady mayor and the council leader, amongst others, who have embraced the idea behind Silk River.

After all the ceremonies are over, Ali Pretty who is the force behind the project, sits on the stage with me. “It started when I moved to Purfleet. I was being shown around and they took me to the fort at Tilbury which is the same design as the fort in Calcutta. That started me thinking about the connections.” From such small beginnings the Silk River idea grew, now embracing several thousand people who have contributed in some way. Ten communities down the Thames, many deprived and struggling, who have united in a shared history to help produce what is an immense artistic undertaking that will resonate with them for a long time.

Explore the Dartford scroll through the art, images and reflections of the people that made it possible 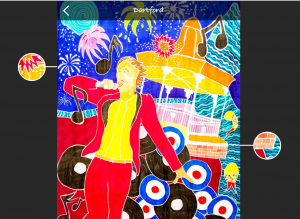 Photos from the Silk River walk in Dartford, 20th Sept, by Mike Johnston.