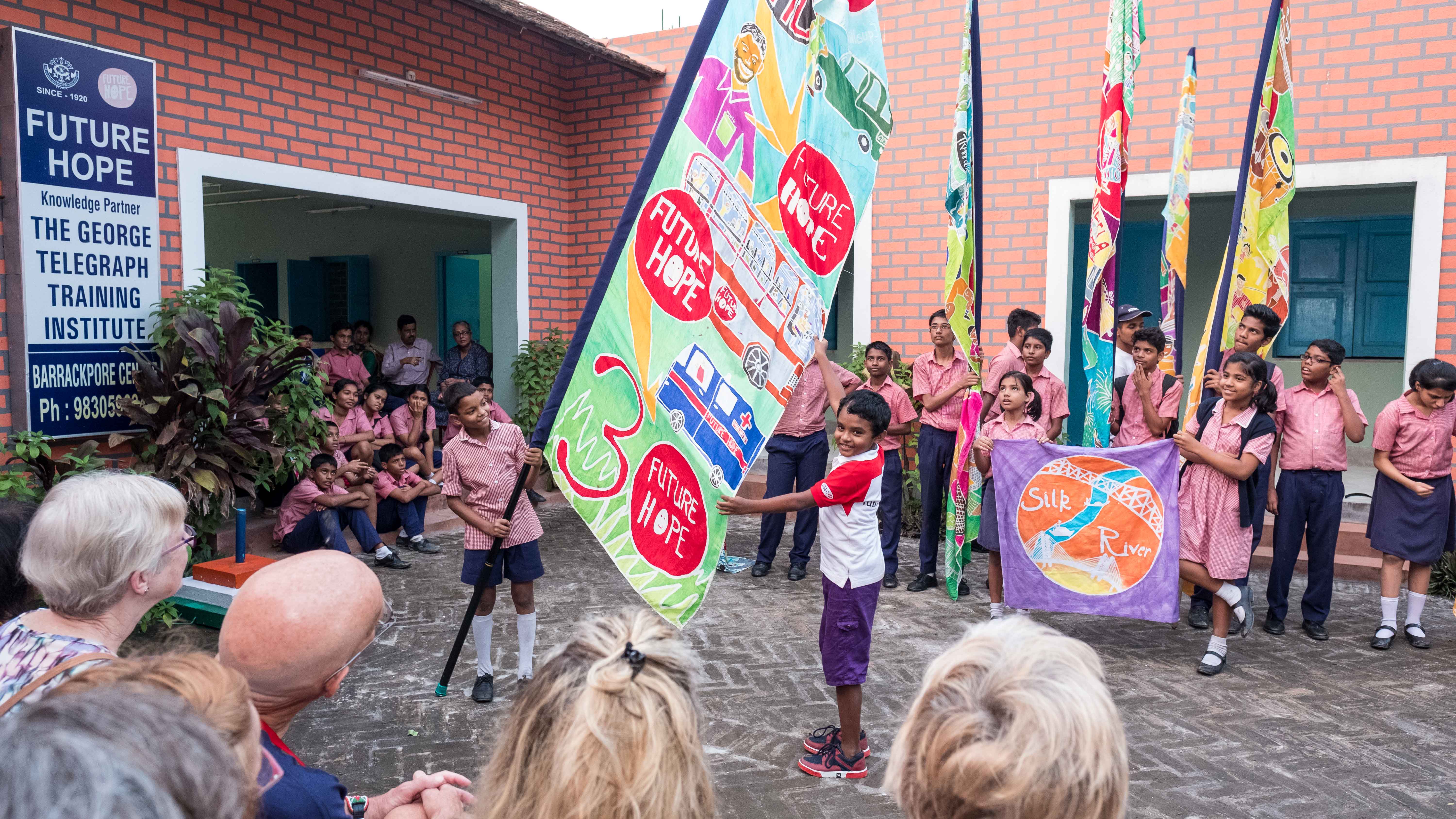 At the river we meet up with students and staff from Future Hope, an NGO who rescue children from impoverished families and give them an education. Some are kids who have been abandoned on railway station platforms, others have families but no prospect of attending school. Despite such tragic circumstances, there are no long faces here: they are full of life and laughter. 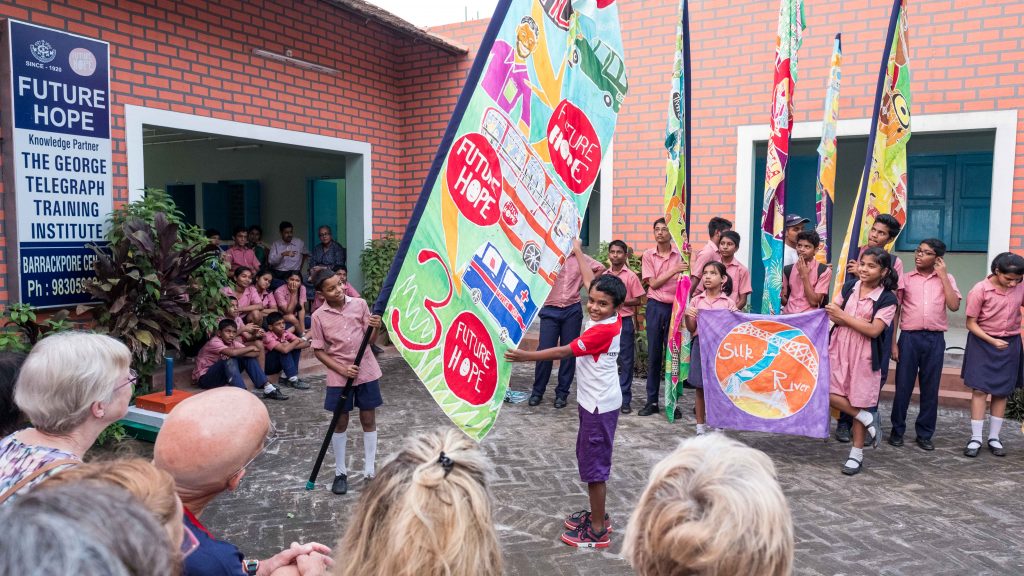 We parade the flags back up the lane and stop for some speeches. When I look around I realise that we are outside the entrance to the big house that I’d spotted earlier. In a break between speeches, I head to the gate and call the watchman over. Could I come in? He refuses. I try to persuade him but he won’t budge. He cannot allow it. I do manage to glean some information, however. The statues are of colonial-era viceroys and governors that were deemed unsuitable for public display after independence. The house is empty but gets used for government functions about once a month. I persist. Could I just see the garden? No. Only to examine the statues? Absolutely not. It seems a bit un-Indian to me – that immovable no. India is a country of rules and regulations, but also of negotiation and blurred lines. But then I spot the CCTV cameras and understand why he is so implacable.

We parade the flags through the streets and reach the Gandhi museum where the children perform a short play. I talk to a few of them. There are around 300 children in the Future Hope programme. Amitesh who is sixteen tells me he loves football and wants to be a professional. Sarfraz (17) is studying commerce and wants to be a CEO and to see the world. Education has opened their eyes to the possibilities out there, and bought the realisation that closed doors can be opened. 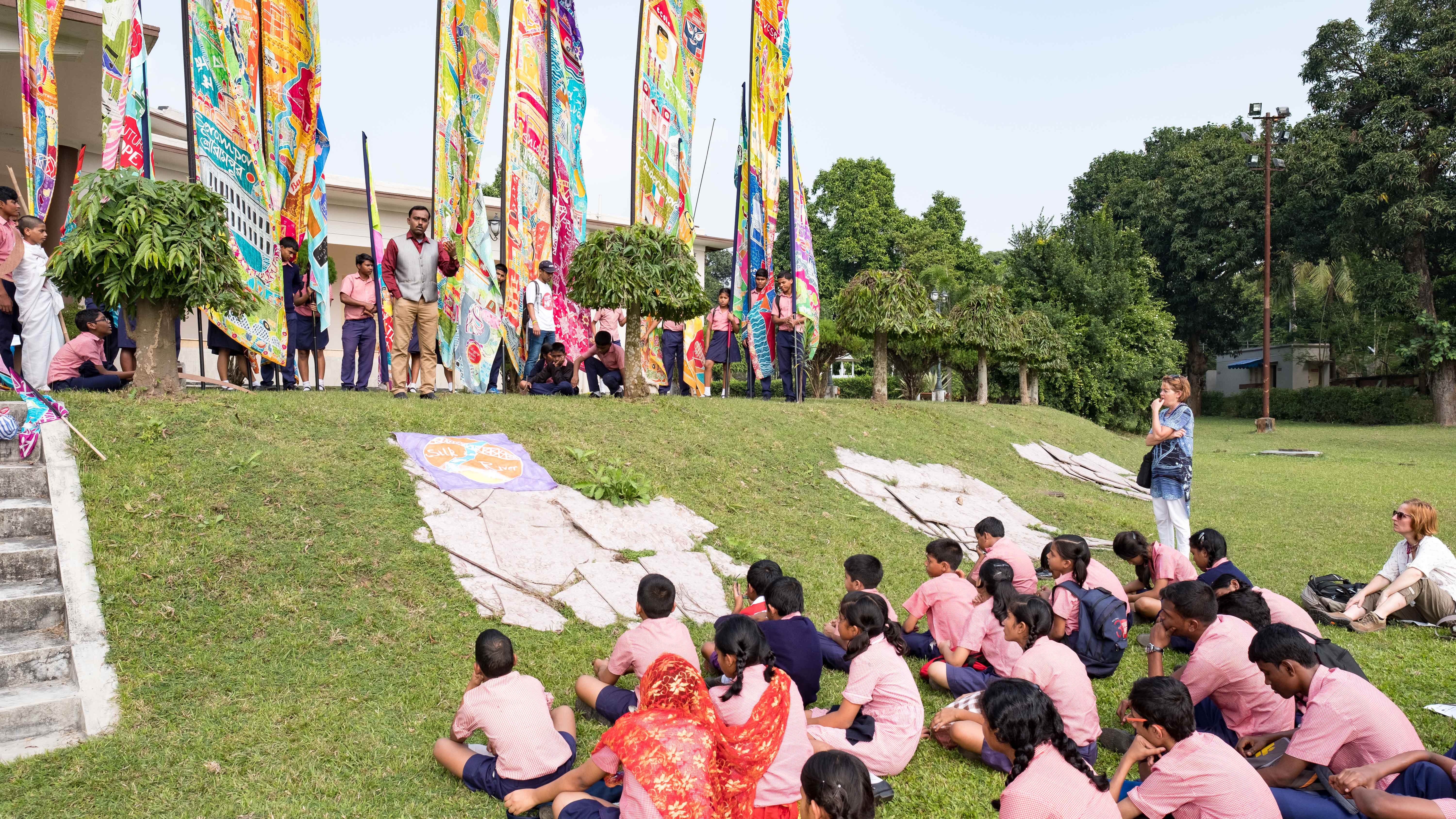 In the afternoon I take the ferry across the river with Shaunak, one of our youthful assistants. He too has ambitions: to be a film maker, a subject he is studying at the Satyajit Ray film school in Calcutta. On the Serampore side of the river we walk through the streets. Everywhere there are handsome old colonial-era buildings, now covered in plant life and gently crumbling. Saris hang from ornate balconies, a tethered sheep stands in an old doorway, a cockerel sits on top of a classical portico. Shaunak recalls a Bengali film called The Future of Ghosts. “They used a fantastic old building as a location somewhere in Serampore.”

It seems like a wild goose chase but we decide to find it. After two tuk-tuk rides and much conversation with chai sellers and passers-by, we arrive at a gorgeous two-storey block with peeling yellow walls and green window shutters. Further down the street there is a grand entrance with grey stone columns and a parapet that looks ready to fall into the street. The gate is open. We enter.

Immediately a short old man who had been dozing in a chair by the columns leaps to his feet. “What do you think you’re doing? You can’t just stroll in here! This is private property. Entry is forbidden. Get out!”

We apologize and stay where we are. Shaunak tells him we are film makers and we like old buildings. Maybe we need one for a film. His body language, all aggression and blocking, seems to soften. I ask if he was once a military man? He has the bearing of an army officer. His back straightens. “What did you say you wanted?”

“Just to take a look inside. Perhaps you could guide us? You must know a lot about the place?”

Finally, the flattery works and he agrees. We go through a dark entrance hall and emerge in a magnificent courtyard. Huge columns rise above us and at one end a flight of stone steps leads up to a series of ornate archways. “It was once the home of the Goswami family,” he explains, “They were zamindars and very rich. They never needed to go shopping – everything was to be found on their land – except salt.”

And what happened to them?

“They lost their lands and now there is just one old lady living in one of the rooms. The rest is empty or various schools.”

He takes us to see the balcony and the temple. I ask if he remembers the Danes: Wasn’t Serampore theirs?

”They were always fighting with the British.” He looks at me and the ghost of a smile appears. “You are nothing compared to them. They were much whiter, and also very red.”

By now he has become so friendly that he lets us take his picture and even pose him on the balcony. We leave as it’s getting dark. Maybe the ghosts are coming out?

Out in the street Shaunak buys me a tea. But this is Lebu Chaa which is no ordinary tea. This Bengal speciality is tea with sugar, lime, asafoetida and salt – lots of salt, the one thing the zamindars could not get for free.

Later, in the tuk-tuk heading back to the hotel, we chat to the driver. He has borrowed money to buy the new electric machine, but business is not great, or as he puts it: “We eat dhal and rice”. I ask if he has always driven a tuk-tuk? He gives a rueful smile. “No, I was a weaver in a cotton factory – a skilled job. I was at college! But the owners bought a new automated Chinese loom and, three months ago, I was out of a job.”

Doors close. I think of the Ashimet and Sarfraz and their optimism. Hopefully they will have the resources to negotiate the closed doors that we all, inevitably, encounter. 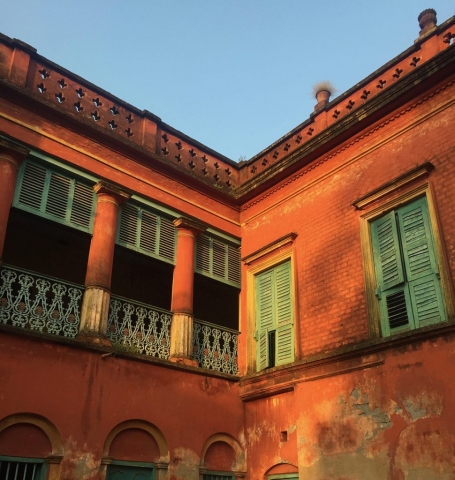 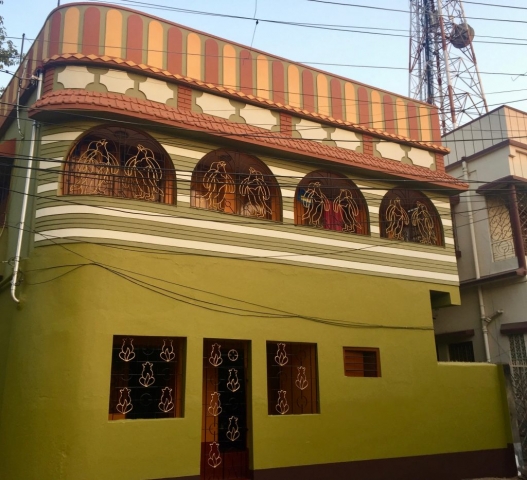 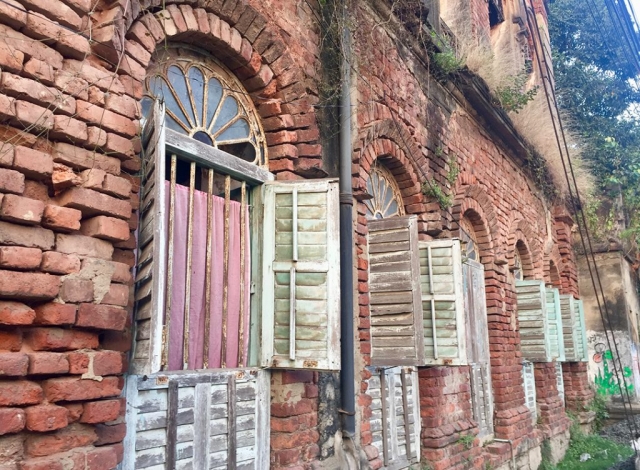 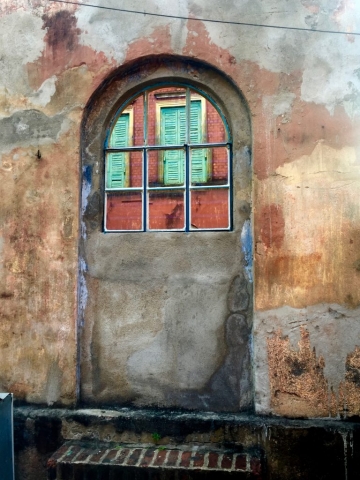 Explore the Barrackpore Scroll through the art, images and reflections of the people that made it possible 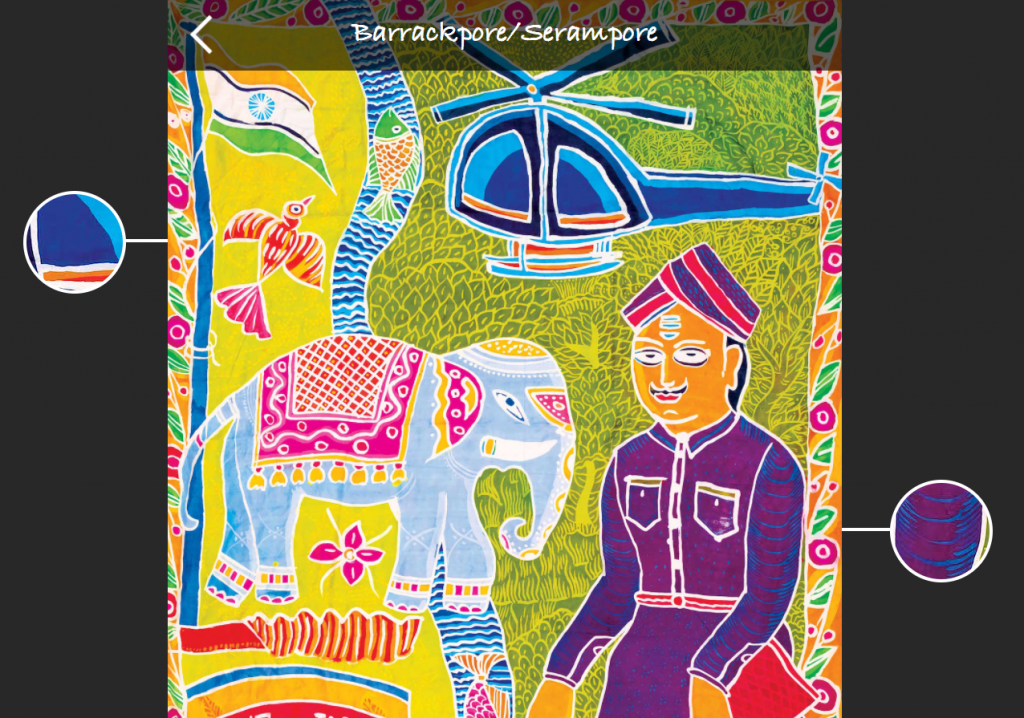 Photos below are from Day 7 (12th Dec) in Barrackpore, all by Mike Johnston.