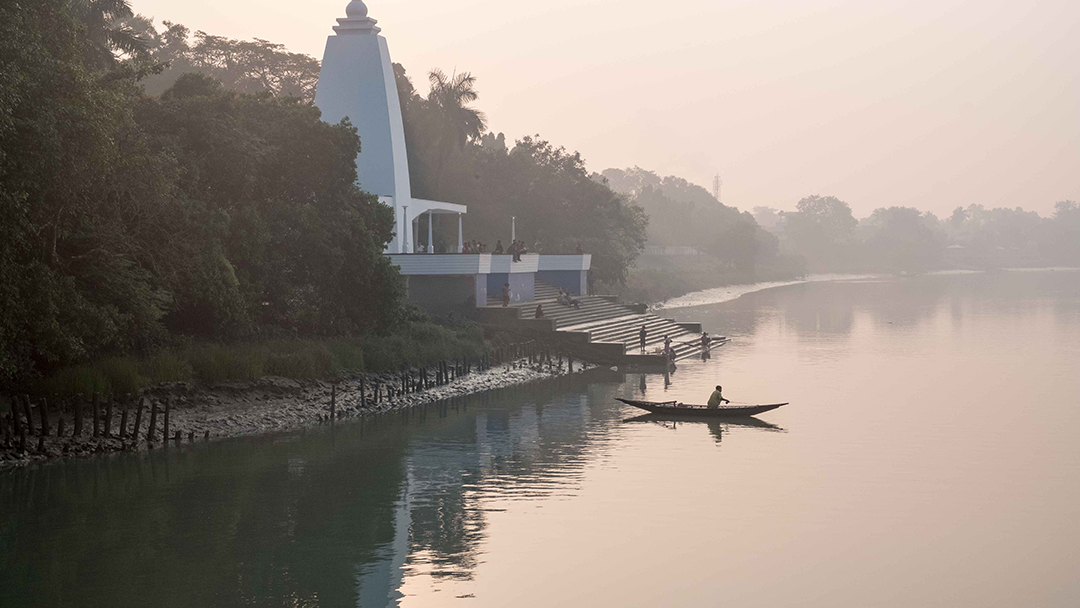 It’s our last day on the river today. We leave at seven in a fast-running tide that’s carrying rafts of water hyacinth along, some of them inhabited by pond herons.

You might think that as we approach Calcutta the wildlife might disappear, but as we pass under Howrah Bridge a dolphin surfaces to breathe and there’s a boat anchored nearby where fishermen are diving with face masks. I cannot imagine that they can see much. There are kingfishers here too, one is using a mooring rope as a lookout point. 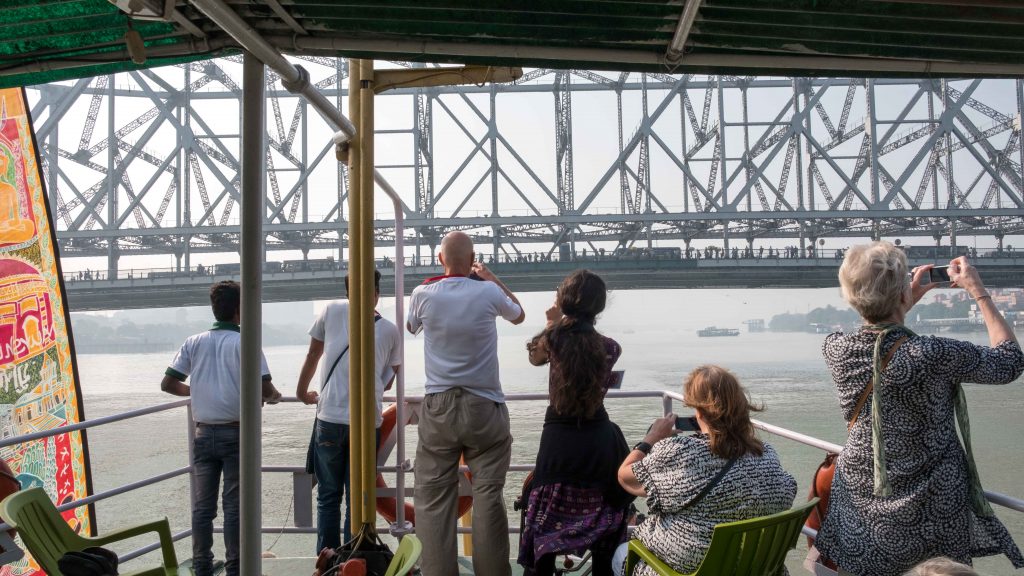 We head across town to the Marble Palace, an oasis of beauty and calm in the chaotic maelstrom that are the city streets. At the gate there is a guard armed with a short spear. Inside is a tranquil garden dotted with white marble lions. The house was built in 1835 for Rajendra Mullick, a young man who had made a fortune trading with South East Asia. It was a boom time for Calcutta both in business and culture – one followed the other. Over 200 grand pianos were imported in one year. Rajendra too had a desire to add to the cultural mix, buying European art to adorn his palace. Later, when the Nawab of Oudh was deposed by the British, the royal menagerie ended up in the palace gardens. Even today seven generations later, there are cages for birds and small animals.

I talk to Sourendra, a descendant who grew up in the palace and still lives here. He tells me that many of the 250 workers who maintain the palace are also descended from the original workers. Another tradition that survives is the free distribution of food. Every day several hundred poor locals have lunch in a hall near the temple. “We always serve a vegetarian kedgeree.”

Sourendra is a pianist and together with his musician friend Soumyojit, he plays us a few songs on a balcony overlooking the garden, notably a Tagore song agoon er parosh moni, which moves some of the group to tears. It is a moment of utter beauty. “We have kept up the cultural tradition,” Sourendra tells me afterwards. “And many brilliant people have come here. Pele came and asked to hear some Indian classical music so we did tillana, an uptempo piece. He recognised the rhythms and started singing samba to it. He told us that when he was a boy he would tour the local bars singing samba to get money to buy football boots. In keeping with our traditions we tried to touch his feet, which confused him till we explained, and then there was a moment of pure magic. Some energy transferred.”

We go on a tour of the rooms which are adorned with Ming vases, statuary and paintings. The billiard room must be the grandest I’ve seen. The walls are ornate with a Wedgewood design and several statues preside: Apollo, Venus and an American Indian girl. “I played here with my grandfather,” says Sourendra. “He was Indian champion.”

From the Marble Palace we walk out on to Chitpur Road, a roaring hooting tangle of cars, rickshaws and tuk-tuks. In small shops many trades are going on: craftsmen carve moulds for sweets, others cut boards for rolling chappatis, some are making drums. Further down there are safe-makers, milk churn builders, and blade merchants – every imaginable knife for every purpose from cutting sweets to slitting throats. Then we enter the labyrinth of lanes that is Kumar Tuli. Here everyone is engaged in making clay figures for pujas. First a straw mannequin is made, then clay from the Ganges is added until a lifelike figure emerges. “Fifty-five years ago when I started,” says Samir Paul, one of the craftsmen, “There were far fewer pujas, and only for the zamindars, the landowners. Now we send them all over India, and to other countries. There are fashions too. For example, sometimes they’ll want everything to be Rajasthani style, so we do that.” 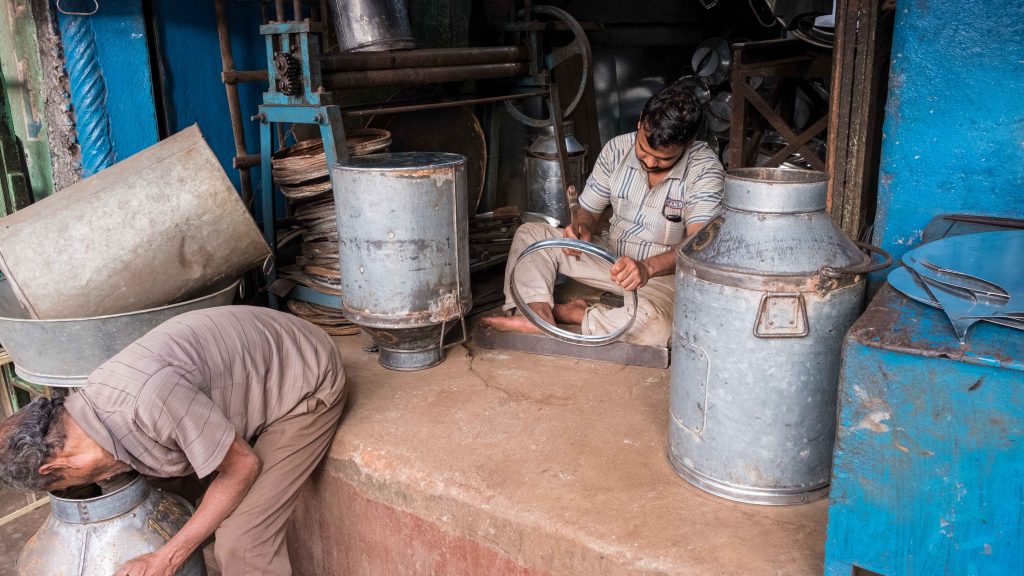 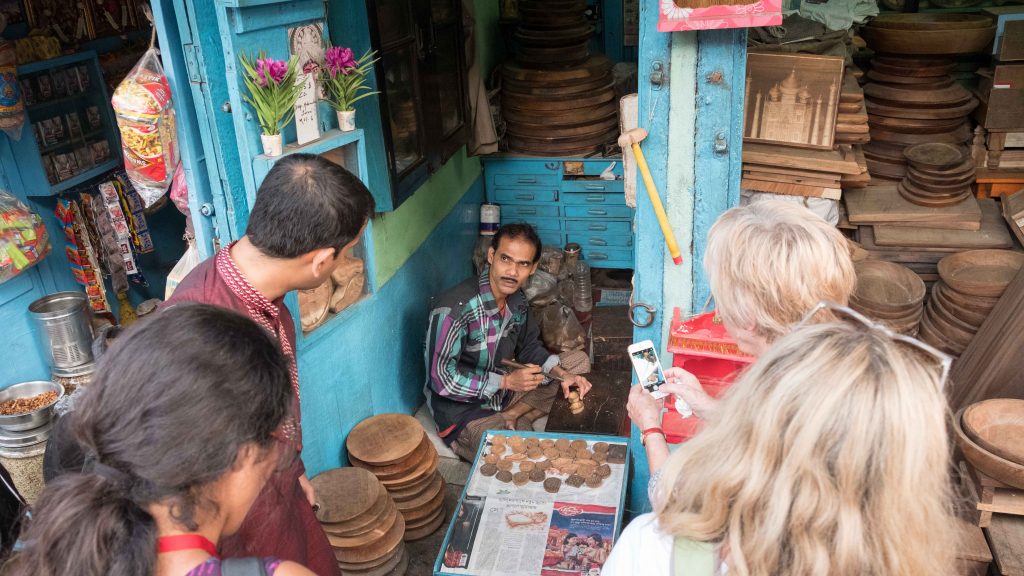 Samir is a lucky man. He found a trade that was on the rise and stuck with it. For others there is a restless search for a means to make a living. Among our assistants on the trip is Bablu, a man whose dream is to be a boom-holder in the film world. That’s a tough job, holding up a long pole with a microphone on the end. I know, having once done it. “I’ve got muscles,” he says, “And I can’t be an actor or a director, so I’ll be happy as a boom.”

Bablu’s career so far has inexplicably failed to wipe the smile from his face. Among many other trades he has delivered oxygen tanks, sold flowers, and worked as a printer. Once he was a truck driver’s assistant, carrying tea from Assam. There, on a lonely jungle road, he and the driver were stopped by dacoits who dragged them into the jungle and held a sword at the driver’s throat, demanding to know where the money was. “He knows!” he said, pointing at Bablu who took them back to the truck where the money was secreted inside the fuel tank. They took everything, even clothes. When he got back to Calcutta a month later, Bablu decided trucking was not for him and took up selling lottery tickets, carefully saving every spare rupee. Unfortunately, the investment scheme he chose proved to be a scam and he lost his life savings. Meanwhile one of his regular customers won 45,000 rupees.

I ask him his secret. Why, in the face of such setbacks, is he so happy? But he just laughs.

Explore the Jorasanko Scroll through the art, images and reflections of the people that made it possible. 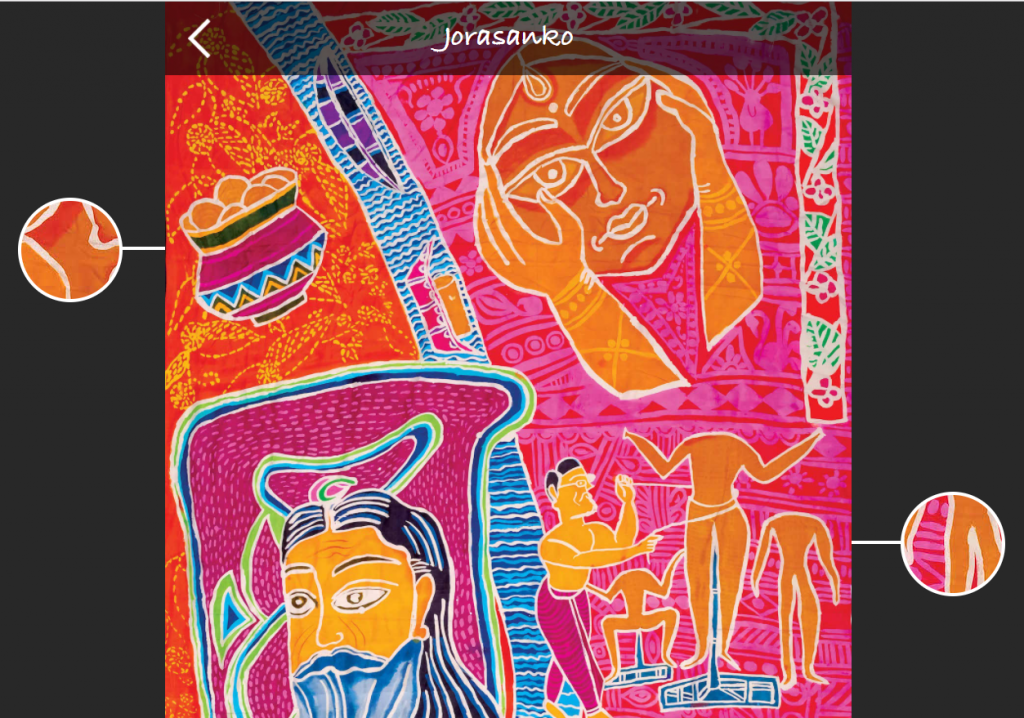 Photos below are from Day 8 (13th Dec) at Jorosanko, Kumortuli and Marble Palace all by Mike Johnston.