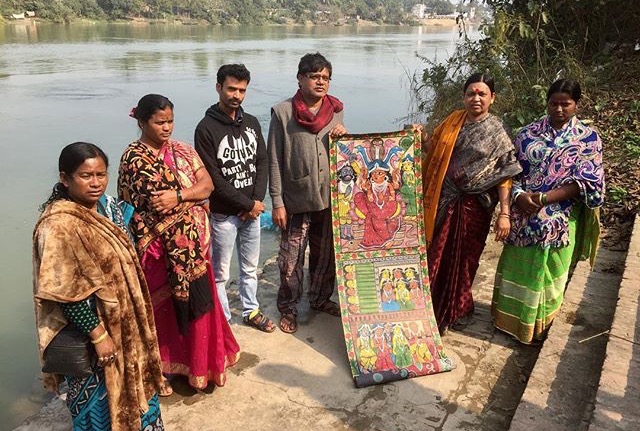 On February 7, 2017, Posted by admin , With Comments Off on Kinetika invites West Bengal Patachitra artists to work with communities along The Thames Estuary

Kinetika has invited leading Patachitra artists, Swarna and Mona Chitraker to the UK in from 6 to 10 February

Following a month long silk painting residency throughout January in West Bengal, India, a week of workshops will kick off the Silk River project in the UK, collaborating with the Government of West Bengal and UNESCO Rural Craft & Cultural Hubs (RCCH).

Patachitra is a unique folk tradition of visual storytelling accompanied by songs performed the Patuas. The painters themselves are called Patua and bear the surname – Chitrakar. The paintings are mostly based on stories on mythology, social, historical or contemporary issues. The Patuas compose songs on the stories then paint to corroborate with the story which they unfurl and sing. This makes the Patuas lyricists, painters, singers, all blended into one.

The collaborative workshops will inspire the UK partners in their design of ten silk scrolls that will illustrate specific stories connecting the 20 chosen riperian communites that lie along the banks of The Thames and The Hooghly.