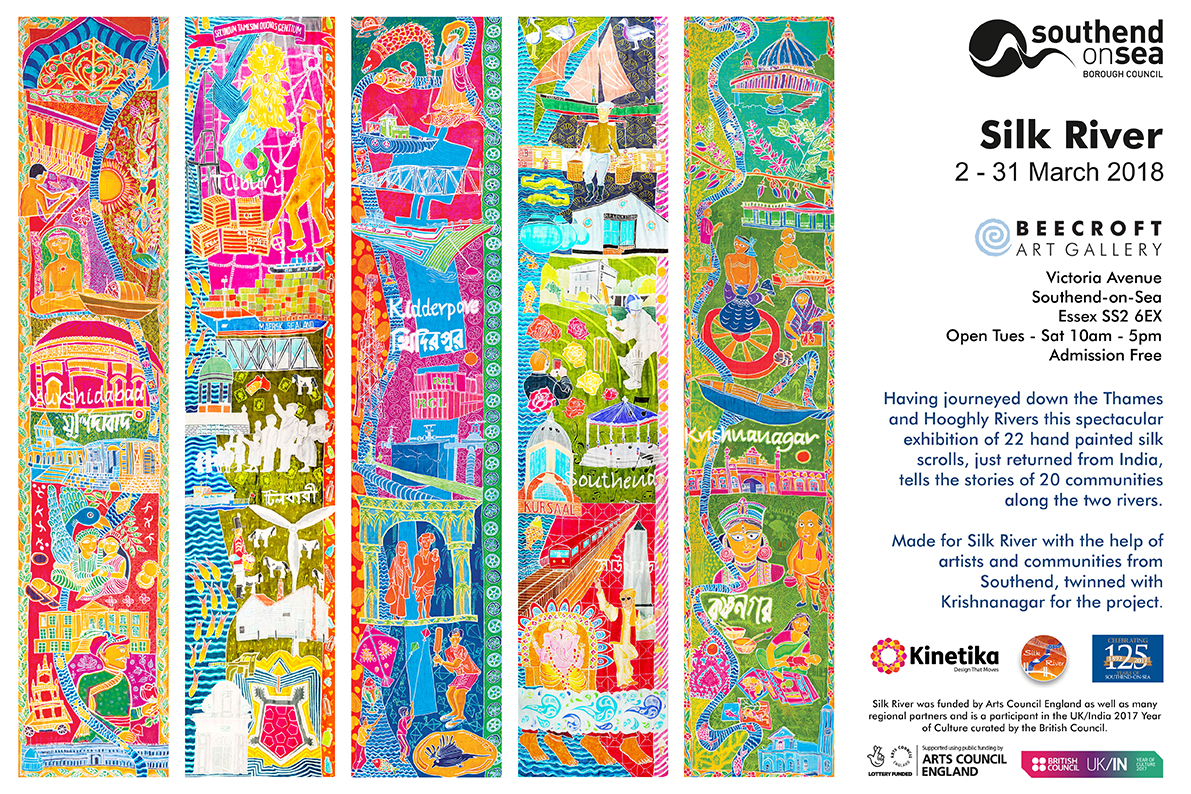 On February 22, 2018, Posted by admin , With Comments Off on Southend-on-Sea exhibition of Silk River scrolls

*Update* The exhibition has been extended – the silks will be taken down on Weds 25th April, so make sure you see them before then!

Having journeyed hundreds of miles down the Thames and Hooghly rivers, the beautiful silk scrolls painted for Kinetika’s Silk River will be on display at the Beecroft Gallery in Southend-on-Sea from 2nd March to 25th April 2018.  The 22 scrolls have just returned from India where they were exhibited at the spectacular Victoria Memorial Hall in Kolkata.

In total 192 artists, based along the Thames and Hooghly rivers, collaborated to create these colourful scrolls, each providing a unique perspective and view of the locations.  Southend has its very own scroll, made by local artists, which features images of Old Leigh Studios, a cockle fisherman, the Endeavour, Chalkwell Hall and includes references to the Hindu Association, the Kursaal, cricket and of course the sea, amongst other things. Tilbury and East Tilbury also have their own scrolls, along with Dartford, Gravesend, Purfleet and areas further into London such as Barking & Dagenham and Tower Hamlets.

The silk used to make the banners even has a story all of its own – it is a special high grade of hand woven cloth that, under the guidance of Crafts Council of West Bengal, was woven on looms that had not been used in recent memory.  The silk thread originates from an area north of Kolkata called Murshidabad and is not mixed with yarn from other parts of India or indeed the world.  This is a unique opportunity to see this precious silk up close and examine the beautiful design work from the many artists that took part.

Alan Gemmell, Director British Council India said: “Silk River has threaded communities and craftsmanship along the rivers Hooghly and the Thames, creating curiosity about the rivers, the people and their culture – achieving exactly what the Year of Culture between UK and India set out to do. The project connects, inspires and celebrates the two countries in a unique way”

Each of the areas that took part in the UK had an Indian location that it was twinned with for the project.  Southend was matched with Krishnanagar for example, because they both host large communities of artists. Come to the exhibition to see for yourself the similarities and differences between all the different places.

The exhibition is organised by Southend-on-Sea Borough Council and thanks to funding from ‘125 Projects’, entry is free.

Closed on Sundays and Mondays