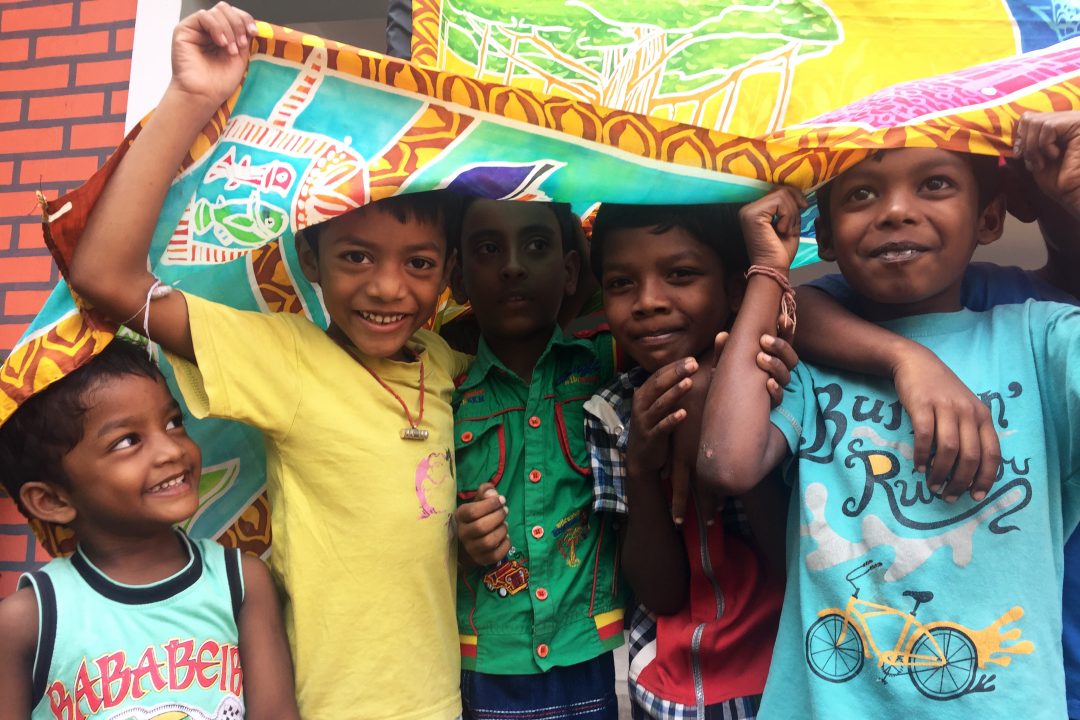 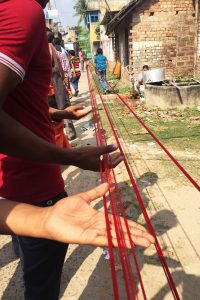 Ali Pretty, Jacci Todd, (Kinetika UK) and Ruchira Das, Naireet Basak (Think Arts) took a ten-day journey along the banks of the Hooghly to hear stories from local people along the way.

After a short tour of each place the team conducted drawing workshops sketching ideas on paper, as the foundation for the designs of a story map to be created at a textile residency in Murshidabad in January 2017

Between September and December 2017, these communities will be linked with ten more along the Thames to exchange their stories during two ten day walks and share them with the world in the form of 20 hand-painted Murshidabad silk scrolls.

In spite of the world reeling in shock at the election of Trump and a lack of cash on the streets of Bengal, our journey must continue.

We retrace British footsteps to the source of this narrative – Silk.

A short walk from the river at Jiaganj, we turn off the main street and follow one hundred metre-long lines of freshly dyed red silk drying in the morning sun to enter Tatapari. The street is filled with the sound of the steady rhythm of working looms emanating from dark sheds where weavers create intricate patterns transforming thousands of fine threads into beautiful silk sarees.

Crossing the river to Azimganj we pass several old Raj Bari’s, gaining a glimpse back into the Zamindar era moving on to visit numerous Jain temples ranging in style from the superbly detailed terracotta Char Bangla to the delightfully kitsch newly painted Jain headquarters.

Day 2: Arriving in Maheshganj, Nawadeep we take a morning walk with Ranodhir Palchoudhuri, proud owner of the beautifully well preserved French plantation house Balakhana. Always ready to entertain, he embellishes stories tracing back the dark history of Indigo. “The extraordinary thing is it is yellow before it becomes blue.” He beams. Dyers and weavers still live and work within half a mile of the estate walls, rinsing cotton, daily transforming the colour of the river.

Further up this tributary, the Jalangi, lives the Guni community of Krishnanagar. We watch the rich alluvial clay being scooped up in handfuls to be sculpted by local artists into tiny clay dolls, not only of gods but other characters such as the legendry local comedian Gopal. There are some larger studios too, including that of Gautam Pal now of international acclaim for his sizeable clay representations of many key political figures ranging from Indira Gandhi to Karl Marx.

Day 3: An action packed tour of Chandernagore with Neline, a delightfully eccentric Belgian lady, married into the Mondal family who were responsible for creating The Strand.  We make a brisk start at the Matri Bhasha monument, a gesture of thanks to the French for their contribution to the promotion of Sanskrit, before taking a diversion to the Kanailal English school through to the ex military port of Laldighi alongside which is the first Girls School, Krishna Bhabani and finally to the abstract Nandadulal Mandir, a shelter to freedom fighters seeking refuge from the British.

We chat over lunch shoveling in hot local biryani. “We have our own Jagadhhatri puja, here in this courtyard.” Neline’s eyes twinkle as she recalls the light sculptures that animate the procession. “They’re electric wizards, now world famous, this community of artists based here.”

Day 4: Zigzagging the river to Barrackpore for a morning with Future Hope in their Skills Centre and village designed by British architect Anthony Harrison, we chat about the current political climate with founder Tim Grandage. “Just stay positive.” He smiles. “It will be fine.” He outlines his vision to replicate this model in Lebanon and Turkey. His energy is reflected in the children’s drawings that include the fiery Mangal Panday. They send us off via the army barracks to the Gandhi Ghat where we catch a small boat over to Serampore.

Down a narrow alley we trip upon a block-printing workshop, four tables of Bangalore silk each hand-printed with a unique design. Wandering through the lanes we pass stunning old colonial buildings alongside brightly painted new builds before passing Serampore College and back to the Ghat.

Day 5: Baghbazar, “Come let me show you, this is my favourite place.” I’m with a group of young art students of RSU, who’ve never been here before. We weave our way into Kurmatouli that’s sleeping off the pujas. We work our way back along Chitpur Road past the Jatra houses to Jorasanko, where we follow Tagore’s travels through the museum displays contemplating how Calcutta’s interaction with so many cultures led to the Bengal Renaissance. The students sit on the floor and make beautiful drawings.

Day 6: Barabazar, Bow Bazar and the Twins Tour of North Kolkata. Meeting point: 7.30am Chandni Chowk Metro. The city is still heaving itself into the day, river water spurts from the underground canals onto the cobbled streets, kids and men in red checked gamchas delight in morning bathing rituals. We stumble along the uneven surface to Bow Bazaar Street, “Named so because this is where you could buy a wife.” The twins smile in unison. That was way back and thankfully Those Days are long gone. I’m happier heading over to Barabazaar; worlds collide past the Synagogue, the Armenian and Portugese churches and the Chinese temple who coexist with Hindu gods that squeeze themselves into shrines amongst the stalls of this crowded market place. Coming from East London, this is home to me.

Day 7: The colours, the smell, the noise, everyone’s busy going somewhere. Under Howrah Bridge, stepping through streets strewn with flowers we catch the Launch to Howrah. Looking up at the huge steel girders, this iconic structure is the image Calcutta holds to the world, a sea of people, taxis, trucks, rickshaws, all crossing the Hooghly 24/7. Stepping off we dodge traffic over to the imposing red building of the expansive station where trains depart for all corners of India, weary passengers arrive, just like I did in 1985, after days and nights of second class sleeper travel.

We skirt around the back of the station peeling off down a small lane into Pilkana. “It’s Urdu for the place that elephants are kept.” Victor explains. “It used to be Asia’s second biggest slum.” He leads us past small stalls, I peer inside one, full of three goats. Blood runs down the ceramic tiles into the gutter below.

Another turn. Another world. All clay. Mounds on the ground turned on the wheel into hundreds of little cups, drying in the afternoon sun before baking on the fire. “This is where most of our kids live.” Victor shows us a tiny courtyard housing at least six families around a water pump and a small shrine.

We reach Tara school, entering through a gate into a walled yard, an oasis. Set up by Tara, a disciple of Mother Teresa, the focus is on healthy living. After lessons the staff and a class of young children come to join us, “No, no drawing.” The women giggle. Soon the room falls silent, later we’re served tea in clay cups and share stories around the completed pictures.

Day 8: The road to Kidderpore is long, loud and dusty, passing huge warehouses and factories, we’re looking for the riverbank. Bundling out of the ambassador we follow a track into an open space where boys play cricket in the sand. Tramping an overgrown path past bits of broken brick wall we arrive at the water’s edge. Whizzing frenetically in the afternoon breeze, fighter kites create patterns in the sky.

The swing bridge opens, barriers come down. Crowds press against them, mesmerized by the huge boat that slides past, guided by two tugs and a Port Authority official on a walkie-talkie.

Darkness falls, the yellow shipping light leeks an eerie glow reflecting across the river. A moment of stillness as the bridge inches round, clicking into place. Barriers rise and the cavalcade of motorbikes rev up their engines and trucks roll into the night.

Day 9: Assembling at the Ghat we set off through narrow streets of small houses, the entrance is lined with trinket stalls and snack shacks.

“No Plastic” The sign welcomes us to the Botanic Gardens. Stone ledges are strewn with half finished drinks bottles and empty plastic bags.

Dr. Basant, resident scientist ushers us through the gates into the clean green zone, down wide avenues surrounded by lush plants and a variety of wondrous species.

The highlight for me is the female Double Coconut tree. “It’s 1200 years old, and we want reproduce it.” Basant explains. “So we have gathered seeds from a male tree in Thailand, it has taken six years to fertilise her, now she has born two fruits.” We peer through the iron gates. “ It will take some time.” He continues. “We are hopeful for the growth of a new tree.”

Day 10:  A relentless ride to Batanagar, they’re building a flyover. Suddenly a huge grand gateway rises out of the dust – Calcutta Riverside. We turn into a wide boulevard, sky-high buildings, mostly still a shell, invade this stretch of land, circling seven traffic islands we approach the dwarfed neglected 1930’s Bata High School. Women squat outside, waiting for their sons to finish exams.

Assembling our Murshidabad silk flag to signal the start of our final workshop, we draw a crowd circling in on their bikes, some unsuitable boys.

“Here, do you want to take it?” Immediately five pairs of hands grab the flagpole, we all walk around the side of the tower block to the river. There is a path, but the gate is locked and the guard shoos us away.

Two of the kids have fathers working at Bata, so we head off to take a look. I glance across the water tank straining to see familiar Bata houses, the same as in East Tilbury. Next to them is a blank space. They’re knocking them down.

Reaching the factory we’re summonsed by the Manager. “We’re artists.” We say, as if that explains everything. He shows us a photo of the settlement in 1975, “The hey day.” He sighs.

And so ends our first journey along the Hooghly.

What next? We’ll make our way back to Azimganj in January, where along with 50 artists, craftspeople and local students we’ll transform these stories onto Murshidabad silk.

Our new Silk River video is on our YouTube channel now: