Over to you Dipika! – Elizabeth Lynch 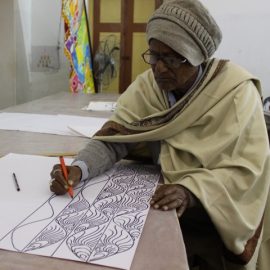 Over to you Dipika! – Elizabeth Lynch

January 2017
The Backstory
As I write now, I’m sitting outside the Jain Koti, home to the second residency this month at in Azimganj, Murshidabad. 15 artists and crafts people from West Bengal are here for 6 days to exchange skills and techniques with Kinetika artists and make five of the ten silk scrolls. Inside the hall, six-metre  lengths of Murshidabad silk are laid out, wax is being heated, dyes are being mixed.

In January 2016 I conducted research for Kinetika to help identify the places and people along the Thames that have some kind of connection with Kolkata’s Hooghly river. This includes industrial heritage, culture, horticulture, arts, Indian diaspora communities, landmarks and shared aspirations for development and regeneration. During 2017, from London’s Kew gardens eastwards  to Southend, and from Murshidabad southwards to Kolkata’s Botanic Gardens, ten riverside communities in each country will design flags that explore  connections between UK and India and map out walks that invite others to explore the places and spaces illustrated by the designs. During the process many conversations will release new thinking about the future of these places and what could happen after Silk River. What do we want to hold on to? What will change?

This is how it began. I met Ali Pretty in 1985 in Raipur, Madhya Pradesh. We both went to Kolkata in January 1985. Now we are back here together 32 years later, working in West Bengal.

In 1985 I directed a production for Habib Tanvir’s Naya Theatre Company in Raipur, Chhattisgarh, Jadugar Kalakar,  a contemporary interpretation of the Pied Piper story, created in collaboration with his company, students and local people. The project was funded by ACE, British Council, Commonwealth Secretariat and Ford Foundation, after my initial R&D visit in 1983.

Habib and his wife Moneeka had met Ali Pretty in Delhi and invited her to join our production team. Ali assisted the designer, my colleague Geraldine Bone, with making the set, props and costumes and became hooked on the interactive approach we took to creative collaboration. This had been developed through working with artists and communities in East London, making performances involving text, dramatic choreography, media and puppetry, with a strong visual aesthetic and special effects.

Ali then joined us when we all travelled up to Calcutta where the Naya were to perform Charan Das Chor. Our group, about 35 of us in all, consisted of the theatre company, a Mahabharata party, a team of Panthi dancers (taking leave from their day jobs in the Bhilai steelworks), Geraldine and myself. The Naya theatre were hosted by their student fans, who extended their hospitality to the UK contingent and, led by filmmaker Korak Ghosh, who set about showing us the ‘real’ Calcutta.

Korak’s alternative tour of his city began with Kumartuli, where the idol makers were making final preparations for Saraswati Puja, followed that evening by a spectacular Jatra performance (a popular Bengali folk theatre form) in a vast open-air enclosure. Outside, Patua scroll story tellers shared, for a few rupees, their distinctively illustrated tales of  Hindu epics and topical news stories  with audiences who couldn’t afford Jatra tickets. Korak later fixed for us to meet the Patachitras, for a very lively, humorous conversation. They had as many questions about our work as we did for theirs. We recorded their songs and bought some scrolls.

Next day, off to Chitpur Road, the Jatra para to see the costume makers, then to Burrabazar. Korak’s cultural tour was completed with an introduction to the Baul, mystic minstrels of Bengal who influenced the great poet Tagore. He took us to meet Purna Das Baul, renowned singer favoured by Bob Dylan and Mick Jagger. We went to his concert,took tea at his house and were kindly invited to stay in his village home, in Ekchakka, just beyond Shantiniketan. Purna’s wife Manju told us stories of their visits to Jagger’s ‘very nice’ palace in the south of France but said that wherever they had travelled in Europe and USA, she still preferred the simple house in their ancestral village. The house was indeed beautiful, made from local materials including clay, with a generous veranda where we all slept after an impromptu Baul concert in the nearby mango grove. It sounds idyllic and it was.

Patachitras, Howrah, Kurmatuli, Burrabazar, Korak Ghosh – remember these, they are threads woven into our Silk River story.
So it began.

So it continued.
Ali returned to UK and decided to become an artist. Her relationship with India, and Calcutta in particular  – was to continue in the following years as she married Korak, returning many times to Kolkata, producing a carnival project, Din Shuru, in 2003  which involved local artists and crafts people, makers of the puja idols and decorations.

I continued my theatre and participatory arts practice in UK, directing arts organisations in Tower Hamlets, returning to Pakistan in 1989 to work with Ajoka Theatre and to visit Naya Theatre and Kalaripayattu gyms in Kerala. Then I had two children and started work as a Director at the Roundhouse. In 1989 and 1994 I worked on an Indian Christmas and a Jain exhibition at London’s Victoria and Albert Museum, producing events and workshops.  In 2002, I organised an international Shakespeare seminar involving  Habib Tanvir during a Royal Shakespeare Company season at the Roundhouse.  I built a youth arts programme around the Indian Midsummer Night’s Dream, a visual ravishing production by Tim Supple, which came to the Roundhouse in 2007. All the actors were generous with their time off-stage, more than keen to share skills and work creatively with our young people, from aerial silk work, to dance, photography and film.

My professional life crossed with Ali’s from time to time. We both travelled to Cape Town for an outdoor arts festival in 2010. I joined Kinetika’s Board of Trustees 2012-14. Ali started to write a book about her relationship with India. The invitation for proposals for Re:imagine India were announced in July 2016 and Ali told me about her vision for Silk River.

It’s Day 6 of the second artists’ residency. Three silk scrolls have been completed – Howrah, Burrabazar and Batanagar. The designs for the Kolkata Botanic Gardens and Kidderpore were completed yesterday and the first wax was applied, tracing the key images onto the silk. Now the first, lighter colours dyes are being applied. The next stage today will be the second application of wax, bringing fine detail to the images and patterns. Tomorrow the final, darker colours will be added.

The drawings, photographs and stories for each banner were gathered from each community partner last November. The group of artists have been recruited by Crafts Council of West Bengal and include Patachitras (story scroll singers and painters) a terracotta Sara painter, a Dokra sculptor, fashion designers and two students of painting and textiles. The artists have worked with four Kinetika artists to use the visual ideas and stories gathered to create a narrative design for each location that will inspire a riverside walk and illustrate the links with the partners places and communities.

The Jain Koti is a large hall, originally built for the wedding of a wealthy Jain’s daughter and subsequently donated to the local people for community use. It has sleeping and cooking facilities and a small garden overlooking the banks of the river. The silk for each scroll or flag is laid out on five six-metre trestle tables. We eat all our meals together and sit in the sun drinking chai and coffee during the breaks, enjoying a flow through of goats, chickens, monkeys, chipmunks and dogs, watching brightly uniformed students cycle past on their way school and chatting to curious small children.

In such a short residency timeframe, with new people, new skills to learn and with only a little prior knowledge of the project, it isn’t surprising that the Indian artists take some time to grasp the scale and vision for Silk River.

Sunil Kumari Paul the Sarapata painter, at 71 the most senior member of the group, initially expressed uncertainty about how his style could be reflected on the silk scrolls. The Patachitras could see the connections in terms of graphic design but the batik technique was completely new for them, as it was for everyone except the textile students. The collaborative nature of the project, the social, cultural and skills exchange, the interactive design process appears to be a first for most of the artists. However, Dipika, one of the younger members of the Patachitra family quickly saw an opportunity.

She was used to learning from her uncle Ananda, how to draw designs of fishes and flowers, but after the group  introductions she said she was excited by what she might learn from the artists from different traditions. She had run workshops herself, sharing the Patua techniques with students, but hadn’t had this kind of experience before, what we might call “professional development”. Likewise, young urban Kolkata student Kamal Das was excited at the prospect of learning from “so many older, very experienced artists.”

s the days went on, and the practical application of drawings, wax, dyes rolled out, the conversations and decision making about the design of each silk scroll teased out the meaning and significance of the images. The project is taking place over a twelve month timescale, across international locations. It takes all of us time to get a sense of the wider project, but by Day 4, it seems we turn a corner with the whole group. Now three scrolls are complete, and look so beautiful, the appreciation of how they will be used to lead walks in each place is clearer. The ‘wow’ factor has started to kick in and most of the artists decide to stay and extra day to help complete the final two pieces.
Sunil told me how much he has enjoyed the camaraderie that has grown amongst the group during the past week. “I only wish I was younger.” he said. The significant experience for Sunil was working with the other Indian and UK artists. Dipika reflected, “Before I only drew fishes and flowers. This week I have been drawing large buildings and cranes!” The fashion designers told me how they planned to use the batik technique on clothing.

None of us can predict the longer-term impact of the residencies on the artists, how the skills learnt and the design approaches explored will be manifest in their work. In my own experience, the effect of such an intense and new experience on any group can often take months and years to release a shift or a change in thinking and behaviour. The challenge for Crafts Council of West Bengal will be to follow up this moment with further opportunities for the artists to develop and flourish.
The creative and cultural exchanges Ali and myself have experienced have had a deep and lasting impact. 32 years ago we could not have predicted Silk River.
Over to you Dipika!